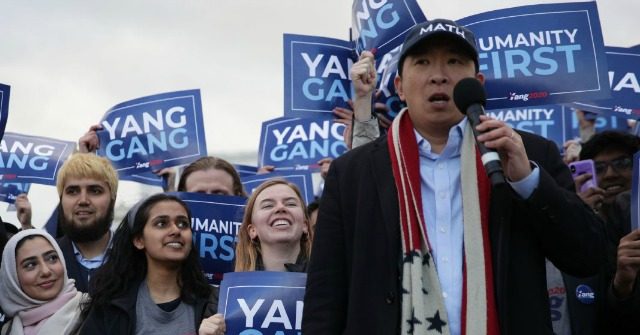 “We have to enact solutions that will help all americans. And when Martin Luther King championed a guaranteed minimum income in the ’60s, which is almost exactly like my and freedom dividend, he didn’t do it for any subset of Americans. He did it for all Americans and that’s again how we move our country forward,” Yang said on HBO’s Real Time with Bill Maher.

Sen. Kamala Harris (D-CA) started the 2020 discussion about “identity politics” when she claimed the term is used to “shut you up” about issues dealing with race, sexual orientation and religion.

“This term identity politics, people will use that term— it’s like people used to talk about the race card. They bring this term up when you talk about issues that are about race, about sexual orientation, religion,” Harris said. “They bring it up when we are talking about civil rights issues as a way to marginalize the issue, as a way frankly to try to silence you or shut you up.”

“The notion of identity politics has been peddled for the past 10 years and it’s been used as a dog whistle to say we shouldn’t pay too much attention to the voices coming into progress,” Abrams recently said. “I would argue that identity politics is exactly who we are and exactly how we won.”

Yang credited President Donald Trump for realizing how much working-class Americans were hurting and said Democrats need to stop “condescending” to regular Americans who do not live in so-called “super zips” and other well-to-do liberal enclaves that have disproportionately benefited from the high-tech economy.

“When I was growing up, the Democratic party was the party of the working class, the little guy or gal. We need to get back to that. I can’t tell you how much credit Donald Trump got just for calling out the pain that many of these communities are in,” Yang added. “And so if the Democratic party stops condescending and says, ‘look, we’re here to actually work on solving your problems,’ we can go very very far with many of the people who voted for Donald Trump.”