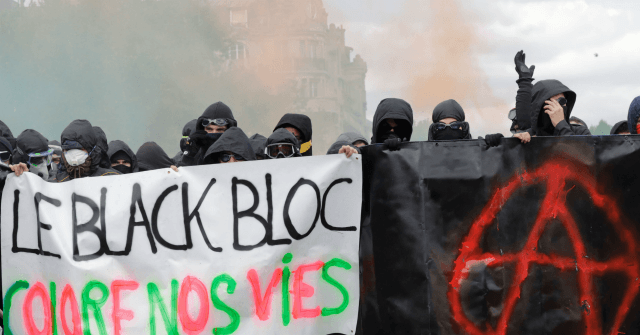 Far-left anarchist graffiti was found on a war memorial to those who resisted and liberated the southern French commune of Névache from Nazi occupation during the Second World War.

The monument, located at the Col de l’Echelle mountain pass in the Alps, is dedicated to the Maquis resistance fighters from the Second World War and was also partially vandalised along with the anarchist symbols that were drawn all over it, Le Dauphine reports.

A chapel located near the monument was also subjected to vandalism with several far-left slogans spray-painted on it including a demand for open borders.

Conservative Le Republicans local politician Arnaud Murgia expressed anger over the incident on social media saying, “shame, the day after the 75th anniversary of the [D-Day] landing. Those who insult France must know that a certain number of us will always stand in front of them.”

The Col de l’Echelle mountain pass is well-known as a place where migrants attempt to cross illegally from Italy into France and was the site of a protest by the Defend Europe mission last year. Following the anti-mass migration protest, far-left open borders activists attempted to storm the border with a number of migrants with two activists taken into custody by police.

The vandalism comes only days after World War Two era graves were smashed in Shipley, West Yorkshire on the day of the 75th anniversary of the D-Day landings.

Local press reported the vandalism had been going on for quite a while. A resident said of the repeated attacks on crosses in the church graveyard: “It hurts my heart to see this, it’s a terrible thing to do. It’s a disgrace… For quite a while people have been going into the cemetery and stealing the Celtic crosses.”

The incident in Col de l’Echelle comes just under a year after another war memorial, in the village of Saint-Jean-du-Gard was vandalised with similar slogans demanding “no nation, no border.”