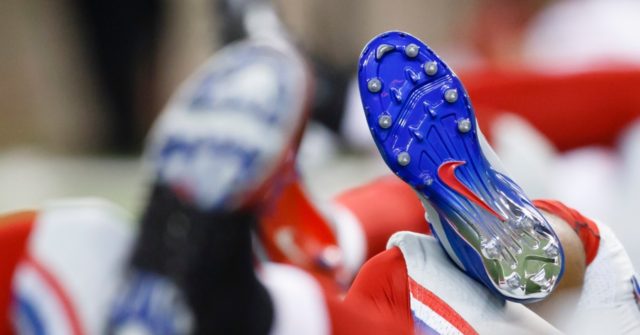 The Wall Street Journal (WSJ) editorial board observed Tuesday that Nike’s decision to allow ex-quarterback Colin Kaepernick to “call the play” of rescinding the company’s release of its “Betsy Ross flag” sneaker is essentially an “in-kind donation to Trump’s re-election.”

The WSJ board referred to Nike’s cave to Kaepernick as one of those “harebrained controversies” that ultimately “give many Americans the not unreasonable sense that their country is being maligned by pampered social-justice warriors.”

The editorial board continued:

Nike is entitled to cancel its products for any reason. But the rest of us are entitled to point out that no flag of the United States is a symbol of oppression and racism, and that Mr. Kaepernick’s suggestion that it is one—with Nike’s tacit agreement—is political theater based on false history. We’re also old enough to recall when feminists considered Betsy Ross a hero, not a symbol of repression. But that’s another sign of our current political insanity.

The WSJ board noted that, last year, Nike featured an ad campaign that depicted a photo of Kaepernick with the words, “Believe in something. Even if it means sacrificing everything.”

“The slogan is an allusion to Mr. Kaepernick’s belief that the NFL declined to sign him after his 2016 season, not because he played badly (though by most measures he did) but because he knelt during the National Anthem to protest police brutality against African-Americans,” the board said.

It was about the flag all along! He was taking a knee because he opposes the country! He opposes the national anthem. He opposes honoring the flag. This proves it! They always lie. They always lie to us. They hide so much of their real core. Even when they are in the process of displaying it, they still deceive. And there was the media and the Democrat Party applauding the guts and the courage of the forever untalented bench retired, Colin Kaepernick.

Now, Sen. Ted Cruz (R-TX) has launched a boycott campaign as a result of Nike’s decision to cave to Kaepernick:

I love America. I stand for the anthem, respect the flag & honor the men & women who fought to defend our Nation. I respect Free Speech & I’m exerting mine: until @Nike ends its contempt for those values, I WILL NO LONGER PURCHASE NIKE PRODUCTS. #WalkAwayFromNike RT if you agree. https://t.co/IvXNTgvlHq

The senator wrote that he was once a Nike customer, “but they’ve now decided their shoes represent snide disdain for the American flag.”

“Since they don’t want my business anymore, I won’t buy any more,” Cruz added. “Can anyone recommend a good sneaker co that’s not so woke?”

The WSJ editorial board noted that Donald Trump has already “reaped enormous political benefits from the ill-judged fashion among NFL players to kneel during the National Anthem.”

“If the President wins re-election, perhaps he should write a thank-you note to Colin Kaepernick and Nike,” it added.