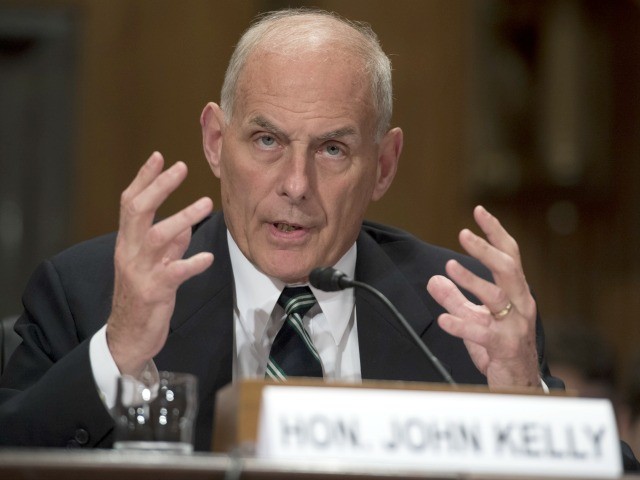 The Wall Street Journal on Friday published a lengthy article about the “new Cold War era with China,” relating a number of tense incidents that explain why so many Trump administration officials are sounding alarms about the Chinese.

One of those incidents allegedly involved White House Chief of Staff John Kelly fighting a “physical altercation” with a Chinese official for control of the U.S. nuclear “football” during President Trump’s trip to Beijing.

This remarkable anecdote comes about three-quarters of the way through the piece:

During Mr. Trump’s visit to Beijing last fall, Mr. Kelly got into a physical altercation with a Chinese official who was seeking access to the nuclear football, the briefcase that includes the president’s mobile nuclear-missile command center. Mr. Kelly told colleagues that he refused to accept an apology, and would only accept one if a senior Chinese official came to Washington and offered contrition while standing under a U.S. flag.

The other reasons given for Trump administration officials turning sour on China are not as spectacular, but they are compelling in their own right: President Trump, a longtime critic of China’s trade policies, was disappointed with China’s tepid response to his actions in defense of Chinese telecom company ZTE. Joint Chiefs chairman Gen. Joe Dunford was angered when a tablet left by one of his aides in a Chinese hotel room was tampered with. Defense Secretary Jim Mattis was hammering out the details of a trip to Beijing when a Chinese destroyer nearly rammed a U.S. Navy ship in the South China Sea.

The upshot is that Team Trump was preparing all along for a new Cold War they saw as inevitable, even as they spent the first 18 months of the presidency wooing Beijing to support sanctions against North Korea. The dual strategy was driven by the conviction of key Trump advisers that while China profited handsomely from the threat of a nuclear North Korea, it really did not want to see actual nuclear missiles in the hands of the deranged Pyongyang regime.

North Korean denuclearization is now inexorably chugging toward whatever unknown destination it will reach, with a mixture of public assistance and back-room sabotage from Beijing and Moscow, so the gloves have come off with respect to China:

Vice President Mike Pence last week gave a blistering speech on U.S.-China relations, saying “the United States has adopted a new approach to China” with the message to China: “This president will not back down.”

On Wednesday, the Treasury Department announced new rules targeting China that tighten national security reviews of foreign investment. On the same day, the Justice Department said it had brought a Chinese intelligence operative arrested in Belgium to the U.S. to face charges he conspired to steal trade secrets from GE Aviation and others. It was the first time prosecutors publicly identified someone in custody as a Chinese intelligence officer.

The Wall Street Journal sees Chinese leaders as stunned by the speed and strength of the Trump administration’s shift to a hawkish posture after seeking cooperation on North Korea. Another way of putting that would be that China expected to win big from its old game of selling itself as the only protection against North Korea’s nuclear lunacy, charging the world a handsome fee for keeping the feral regime in Pyongyang on its leash. For the first time in three decades, it did not work.

“At the Pentagon, military brass have historically sought a relationship with their Chinese counterparts that would survive political mood swings. Even there, senior officials say they have reached their limit,” the Wall Street Journal wrote. Another way of putting that would be that China is the party worried about political mood swings for the first time.

All of this is a prelude to the summit between Trump and Chinese President Xi Jinping scheduled for November. U.S. officials are making no secret of their expectations.

“I believe it’s always better to talk than not to talk, but thus far, their response has been unsatisfactory to our asks,” National Economic Council Director Larry Kudlow said on Thursday.

Other Administration officials are said to be worried President Trump will back away from the trade war with a nervous eye on U.S. and global markets and use even the smallest concessions offered by Beijing as an excuse to declare victory. The Trump-Xi meeting will surely be the most serious test of resolve for both leaders since the trade fight heated up. Hopefully, everyone at the summit will keep a tight grip on their tablets and nuclear footballs.