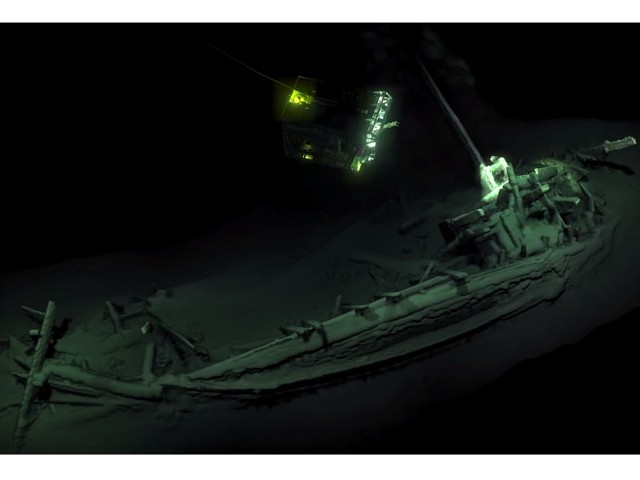 Archaeologists from the Black Sea Maritime Archaeological Project announced the discovery of a 2,400-year-old trading vessel on Tuesday.

“This is an incredible find. The first of its kind ever,” Dr. Kroum Batchvarov told Sky News. Better yet, the shipwreck is incredibly intact, given its age. “We have complete vessel, with the masts still standing, with the quarter rudders in place,” he said.

“A ship surviving intact from the classical world, lying in over 2km of water, is something I would never have believed possible,” said Black Sea Maritime Archaeology Project principal investigator Professor Jon Adams. “This will change our understanding of shipbuilding and seafaring in the ancient world.”

The ship is believed to have been a trading vessel of some kind. Before now, such vessels have only been seen as they were depicted artistically, such as on ancient Greek pottery.

The preservation of the ancient vessel is due largely to the Black Sea’s very low oxygen content. The Black Sea is “anoxic,” with a complete absence of oxygen in 90 percent of its depths. In fact, marine life can only survive near its surface and, even then, not easily.

The ship stands out even among the 60 other shipwrecks found by the Black Sea Maritime Archaeological Project. The project is a three-year, $19 million exploration of the Black Sea’s contents. Other finds vary between “17th-century Cossack raiding fleet, through Roman trading vessels, complete with amphorae, to a complete ship from the classical period.”