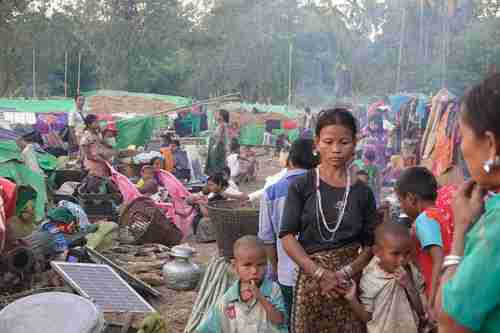 Myanmar’s army has just recently completed most of the job of genocide and ethnic cleansing of Muslim Rohingyas in Rakhine State, forcing hundreds of thousands to flee for their lives to neighboring Bangladesh, where they are trapped in refugee camps. Myanmar’s army began committing atrocities including torture, rape, beatings, and slaughter, burning down entire Rohingya villages, targeting the Rohingyas, as early as 2011. But they crossed the line into full-scale genocide and ethnic cleansing after an August 25, 2017, attack on Burma police outposts by the Arakan Rohingya Salvation Army (ARSA), killing 8 policemen. At that point, Burma’s army began full-scale “clearance operations,” sending hundreds of thousands more Rohingyas into Bangladesh.

With most Burmese Rohingyas now in Bangladesh, and with most Rohingya villages burned to the ground, Burma’s army may have thought its job was done. But now they have a new problem, and they are launching “clearance operations” again against a new group, ethnic Rakhines.

This has prompted the army to launch localized “clearance operations” this time against the ethnic Rakhines. Clashes between AA and Burma’s army in recent months has already forced an estimated 2,500 people to flee from their homes because of the violence. Many of them are sheltering in local Buddhist monasteries.

Myanmar officials said that four police posts in northern Rakhine came under attack from hundreds of Arakan Army fighters after daybreak on Friday, killing 13 and injuring nine, and triggering the army’s new “clearance operations” in the area. Reuters and Special Broadcasting Service (Australia) and AP and Asia Times

Trade unions in Myanmar are begging the European Union not to revoke its grant of trade preferences to Myanmar.

The trade preference program, known as Generalized Scheme of Preferences (GSP), grants to Myanmar the right to export goods to the E.U. without paying tariffs. The GSP “Everything But Arms” (EBA) status allows Myanmar to sell any goods except weapons tariff-free into the E.U. The GSP privilege was granted in 2013. Exports from Myanmar to the E.U., especially in garments and foodstuffs, have risen tenfold in the past five years.

After months of pressure from rights groups, the E.U. is considering punishing Myanmar for “the blatant violation of human rights” referring to ethnic cleansing of Rohingyas and the failure of civilian leader Aung San Suu Kyi to resolve the crisis. E.U.’s trade chief Cecilia Malmstrom said in October, “Our trade policy is value-based. These are not just words. We have to act when there are severe violations.”

However, trade unions and workers groups in Myanmar say that over one million workers might lose their jobs if GSP is revoked. According to Maung Maung, chairman of the Confederation of Trade Unions Myanmar (CTUM):

Over 700,000 workers from the garment industry and over 400,000 workers in fishery industry will lose their jobs and their families will be in trouble. We don’t want to see this situation. So, we request the EU not to revoke GSP.

Withdrawing GSP would also have a significant impact on foreign direct investment since investors who invest in Myanmar to gain access to the EU export market will no longer be attracted.

Card Charles Maung Bo, Archbishop of Yangon and the country’s first cardinal, said, “I am completely against any form of sanction or embargo against Myanmar. Experience shows that this type of measures only harms the poorest sections of the population. They will suffer the consequences, certainly not the rich and powerful.”

An E.U. review team visited Myanmar in October to assess the situation but has not yet issued an opinion.

The same team is also considering withdrawing GSP for Cambodia, because of substantial and increasing human rights violations under the Hun Sen administration. Fibre2Fashion (Myanmar) and Mizzima (Myanmar) and Reuters (5-Oct-2018) and Asia News (Italy)