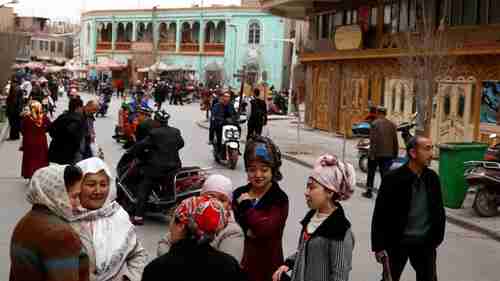 Since the end of World War II, China’s atheist government has been on a “Sinicization” program of all religions. Typically this means brutal suppression of followers who display allegiance to anything not approved by the Chinese Communist Party (CCP). For example, in April of this year, the CCP declared:

In practice, China’s storm troopers in recent years have invaded churches and torn down posters of Jesus and replaced them with posters of Xi Jinping.

As has been widely reported, the Sinicization of Islam has meant sending millions of Muslim Uighurs in Xinjiang province to “reeducation centers,” where they are imprisoned, raped, tortured, and forced to recite Chinese Communist propaganda at the tops of their lungs. When the existence of these camps was first reported, the Chinese vehemently denied that they existed. But in the last few days, they have admitted their existence, but say that the camps are necessary, for the same reason that they give for the violent suppression of all religions: to prevent “extremism” and “splittism,” and to promote ethnic solidarity and religious harmony.

In August, China declared a war against “halalization.” Everyday halal products, such as food and toothpaste, must be produced according to Islamic law.

As part of the sinicization of Islam, the government is pulling down mosques that have Islamic domes that look too much like Arab mosques. All Arabic script must be removed. The mosques must look like Chinese religious temples, presumably Daoist temples.

Books on Islam and copies of the Koran have been removed from souvenir shops. Private Arabic schools have been forced to shut down. It’s also forbidden to have a long beard.

Although Islam is the main current target, the same kinds of harsh measures are being applied to the other non-indigenous religions: Catholicism, Protestantism, and Buddhism. According to Xi Jinping last year, “[We] should adhere to the direction of Sinicizing religion in our country, and actively guide religion to adapt to a socialist society.” Reuters and CNN and South China Morning Post (14-May) and Al Jazeera

Recently I have been doing my own research on China’s teachings and religions, and this is a summary of what I have learned so far.

As an imperialistic country throughout its multi-millennial history, China’s religions have always been heavily tied in with war – either wars of conquest or internal civil wars.

China’s core cultural teachings, developed around 500 BC, are Sun Tzu’s The Art of War and Confucius’ Analects. These teachings tell the harsh rules for winning wars and the harsh rules for maintaining a “Mandate from Heaven” for a unified, harmonious society. Insofar as they can be called religions, they are the pro-government religions.

Daoism as a religion was a reaction to Confucianism. It teaches peasants how to maintain harmony with nature without the harsh Confucian rules, whether you’re pro-government or anti-government, and so Daoism has sometimes been the core of anti-government protests.

Buddhism: As a religion imported from India, not indigenous in China, Buddhism has historically been the most important vehicle for anti-government protests. Subjugated people, in particular, have adopted Buddhism, because in Buddhism all people are equal, and someone who is evil in this life will be punished when he is reincarnated in the next life. Major historical anti-government branches of Buddhism were the White Lotus Society, Tibetan Buddhism, and Falun Gong, all of which have been violently suppressed by the government as major threats.

Catholicism has existed in China since the 600s AD. It became very popular in China thanks to Jesuit missionaries, but the Chinese government has always considered it a major threat because it requires allegiance to an outsider: the Pope. Since 1949, the government has been harshly hostile to Catholicism, and has demanded to control all functions, including appointments of bishops and priests. So today, there are two Catholic churches in China, the Chinese Catholic Church, and the underground Catholic Church, with allegiance to the pope.

Chinese leaders fear Protestantism because the massive Taiping Rebellion (1850-64) was launched by a Protestant convert who believed he was the brother of Jesus. Since 1949, China has harshly controlled Protestantism, even to the point of replacing worship of Jesus with worship of Xi Jinping.

Islam: China’s wars with the Mongols and the Turkic tribes in Central Asia have been against Muslims. Today, the Chinese government has opened “re-education camps” for millions of Muslim Uighurs in Xinjiang province, and Uighurs are regularly raped, tortured, and slaughtered.

Throughout Chinese history, all the internal rebellions or external invasion have had as their underlying motivation a widespread popular religious belief. Therefore the non-indigenous religions (Buddhism, Protestantism, Catholicism, Islam) have been permitted only when carefully (and violently) controlled by the government.

Starting in 1949, China’s government has controlled the non-indigenous religions, but the control took a turn and became extremely harsh starting in the early 1990s, because of two traumatizing events.

The second traumatizing event was the 1991 collapse of the Soviet Union. This terrified the CCP because they realized that the same thing could happen in China, and the massive Tiananmen Square protests showed the way.

So today Xi Jinping is terrorized by Winnie the Pooh because he looks like Winnie the Pooh, and he is terrorized by all the uncontrolled religions since they could lead to an internal rebellion. He fears Islam because it might be used in an invasion of China from Central Asia. He fears Tibetan Buddhism because the Tibetans have never accepted Chinese rule since China viciously invaded the nation of Tibet in the 1950s.

Xi Jinping and the CCP feel a special terror of the Falun Gong spiritual movement. This is an offshoot of Buddhism that began in 1992 in reaction to the government’s bloody crackdown in Tiananmen Square. In 1999, when there were tens of millions of practitioners, China began to arrest, torture, rape, and kill practitioners. Human rights advocates claim that hundreds of thousands of practitioners have been killed for the purpose of organ harvesting, to provide fresh organs to be transplanted into other people. China’s State Council Information Office and Union of Catholic Asian News and Council on Foreign Relations and US State Dept.