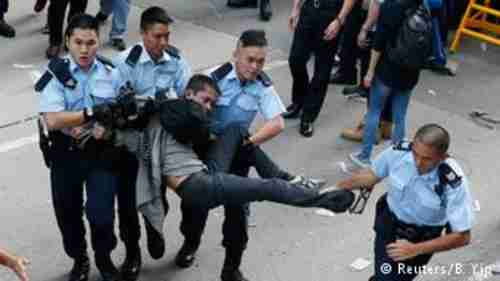 On Wednesday, Canada said that China arrested a second Canadian, Michael Spavor. Chinese police initially questioned him and then contacted the Canadian government. After that, he disappeared.

The international hostility to China has been growing palpably in the last year. It is not just the Trump administration that has been critical of China’s theft of intellectual property and violation of international trade rules. According to analysts I’ve heard, politicians in Canada and Europe and Japan are increasingly “fed up” with trying to deal with China.

The Chinese are also growing angrier at the West, but it goes beyond that.

At the same time, China increasingly gives the impression of a country in societal meltdown. The crackdown on Christianity has become more vitriolic, and the policy of sending a million Uighurs to “re-education camps” where they can be beaten, tortured, raped, or killed for not reciting the party line is one of the most insane policies in the history of mankind. The number of “mass incidents” in China was increasing exponentially for years until China stopped reporting the official statistics and jailed reporters who did so unofficially. It is believed that an economic recession in China could trigger widespread protests or a civil war, as happened with Mao’s Communist Revolution (1934-49) or the Taiping Rebellion (1852-64).

Arresting another Canadian for the second day in a row is extremely reckless because it is going to cause panic among all Western diplomats and executives in China. Even worse, it suggests that China’s government no longer cares how bad it looks and is losing control of its foreign policy.

As long-time readers know, Generational Dynamics has been predicting for years that China and the West are headed for World War III in this generational Crisis era. Things appear to moving quickly now as relations deteriorate. China Digital Times and Bloomberg and Guardian (London)

U.S. government investigators blamed hackers working for China’s spy agency, the Ministry of State Security (MSS), for a cyberattack on the Marriott Hotel chain that collected personal details of roughly 500 million guests between 2014 and 2018.

Other data breaches attributed to China’s MSS include a 2017 Equifax hack that collected detailed credit information on 145 million people, a 2013 Target breach that exposed payment card and contact information for 60 million customers, and a 2015 hack of the Office of Personnel Management (OPM) that collected detailed personal information on more than 20 million government employees, family members and applicants. There were other breaches of healthcare institutions, including Anthem and CareFirst, that provided health data.

It is believed that China’s MSS has created a large database of hundreds of millions of Americans, merging data from all these sources. This data can be used for spying, extortion, identity theft, and so forth.

Taking this a step further, the Chinese company Huawei Technologies is the second largest manufacturer of smartphones in the world, behind Samsung. It is believed that Huawei phones and devices can be accessed remotely by China’s military, as I described in detail last week, with the result that numerous Western companies are banning Huawei from supplying equipment for their networks.

Huawei phones, like all smartphones, keep track of locations and calling data for its users. This data could be accessed from China and merged with the master database described above to accumulate detailed personal information and activities of tens of millions of Americans.

China is already doing this for its citizens in China. China’s military collects massive amounts of data on online activities and uses street cameras and facial recognition algorithms to track the locations of millions of Chinese citizens in real time. This is particularly true in Xinjiang province, where Uighurs are constantly monitored for suspicious activity and a million Uighurs have been sent to “re-education camps.” Washington Post and AP (3-Dec) and New York Times

In a related matter, Google CEO Sundar Pichai testified before the U.S. House Judiciary Committee on Wednesday. He was questioned about the massive amount of data that Google collects about Americans, though not nearly as much as the Chinese are collecting on the Chinese – or on Americans.

Pichai completely evaded answering questions about Project Dragonfly, the massive project to use search engine technology in China to collect data about search requests and add it to China’s huge database of tens of millions of its citizens, where it could be used, for example, to identify “suspicious” activity. Pichai said that the project was under active development, but that there were “no plans” to deploy it in China at this time.

However, Pichai was not asked about the state of the art Artificial Intelligence development center that Google is opening in Shanghai, to supply advanced AI technology to China’s government and military, while Google refuses to work with the American military for even defensive purposes. Google apparently plans to help out the Chinese when China and the U.S. are at war, just as IBM helped out the Nazis at the beginning of World War II. The Street