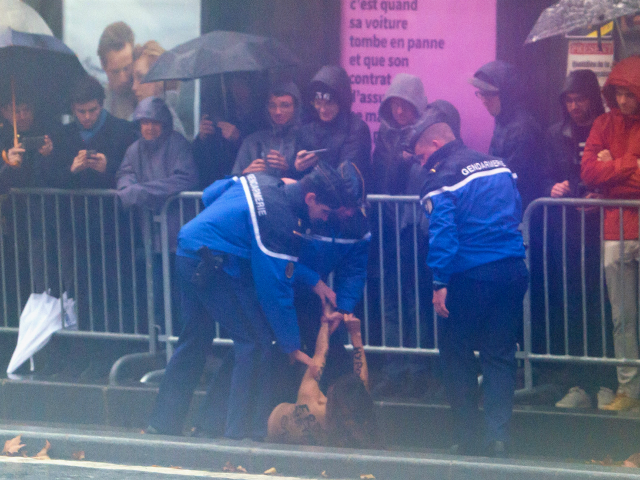 PARIS (AP) — The feminist activist group Femen has claimed responsibility for topless protesters who disrupted U.S. President Donald Trump’s motorcade on its way to a ceremony commemorating the end of World War I.

One woman easily breached tight security along the Champs-Elysees avenue, walking on the midst of the motorcade and shouting “fake peace maker” as the cars passed.

At least one other topless protester also made it into the avenue, but was unable to reach the cars.

World leaders walked side by side to commemorate the end of World War I in a sombre, rain-soaked line as bells finished tolling.

Arriving a few minutes late, they missed the exact moment to commemorate the armistice that ended World War I. Fighter jets passed overhead as the leaders walked to the Arc de Triomphe.

World leaders have missed the exact moment to commemorate the armistice that ended World War I.

As bells rang across Europe’s Western Front, U.S. President Donald Trump headed toward the Arc de Triomphe as did buses filled with world leaders, but they were running late.

Many of the leaders, holding black umbrellas, stood in a line short of the monument.

U.S. President Donald Trump is headed to the Arc de Triomphe on the Champs-Elysees. World leaders were following several minutes later in commemorations to mark 100 years since the moment World War I drew to an end.

Presidents and other dignitaries left the French presidential palace in buses, just a few minutes before the ceremony was supposed to begin at the Arc de Triomphe.

Trump headed separately to the memorial for security reasons, as did Russian President Vladimir Putin.

The war ended at precisely 11 a.m. on Nov. 11, 1918 and Sunday’s ceremonies were intended to drive home the disaster that would befall the world should it stumble into another global war.