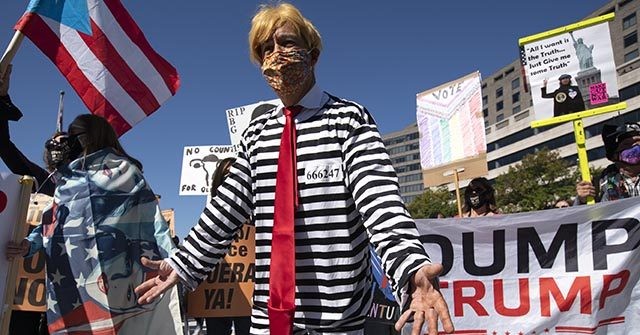 The latest version of the Women’s March, born out of outrage that Donald Trump was elected president in 2016, is still solidly against the president but is this time focused on opposing his nomination of Amy Coney Barrett to replace Ruth Bader Ginsburg on the U.S. Supreme Court — a move one woman on Twitter said was a “Christian fascist takeover.”

“Vote him out” chants at #SCOTUS from #womensmarch pic.twitter.com/6m1ZPrikmI

Right now we are getting closer to the Supreme Court talked to a few people one person cam from all the way from California to march in Washington DC #SCOTUS #SupremeCourt#dcprotest #dcprotests #DC #WashingtonDC #womansmarch #WomensMarch2020 #CountOnUs pic.twitter.com/oVk0o5rRNZ

Hundreds gathered at Washington Square Park in NYC for the Women’s March…and with their voices and signs marched to Wall Street..fighting for women’s rights and equality. #WomensMarch #WomensMarch2020 #womensmarchnyc #WashingtonSquarePark @PIX11News pic.twitter.com/4moRCqwxkv

Barbara Malmet, whose Twitter account says she is an artist and activist, posted a video with her own narration.

Malmet said Barrett’s nomination is “symbolizing the theocratic enslavement of women, LGBTQ people, and all of society.”

“The anti-science, the theocracy, the repression of the Christian fascist takeover of the courts, which is also part of this Trump/Pence fascist regime,” Malmet says.

The Handmaids are there! #WomensMarch https://t.co/PsJ4KT0Fsi

Protesters in Philadelphia said Barrett’s nomination is to “lock in a pro-fascist majority on the Supreme Court.”

“They’re doing this to throw the election to Trump no matter how you, no matter how we vote,” the unidentified woman says in a video posted on Twitter.

And the march was not reserved for women, with many men showing up and some using their children to make a point.

In one photo posted on Twitter, a girl is dressed like the late Justice Ginsburg and carries a sign that says, “I’m more qualified than Amy Coney Barrett.”

This family came from Boston to attend the Supreme Court protests as well as today’s @womensmarch. Their mother says this is her daughter’s third #WomensMarch and her son’s second. #WomensMarch2020 @wusa9 #RBG #johnlewis pic.twitter.com/rn8TRsiRir

“I’m terrified for my nieces future, for my future grandchildren” says Shannon on the reason she is attending the #womensmarch, she came from Portland to DC for the march pic.twitter.com/aNxTrDEupU

A protester in D.C., dressed in a “Nasty Woman” t-shirt from the failed Hillary Clinton 2016 presidential campaign, told the Daily Caller that she was there for women’s rights and to stop “the black community from being assassinated by the government.”