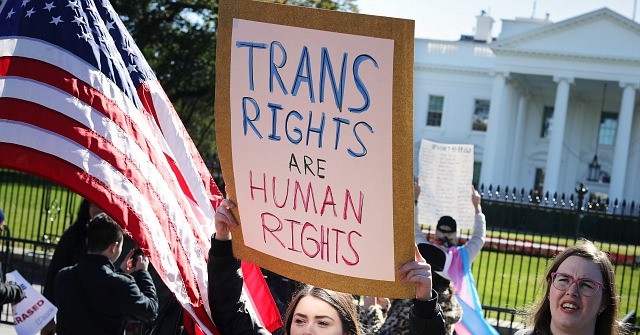 Pro-transgender protesters tried and failed to block a Seattle debate by “gender critical” feminists who argue that women’s rights and status will be lost if men can switch legal sexes whenever they wish.

The pro-transgender and left-wing groups blockaded the Seattle public library while chanting against “TERFs,” which is their insult for women who say that people cannot switch sexes, regardless of drugs, hormones, dress, and surgery. They chanted, “Terfs out!” and, “No hate, no fear, every gender is welcome here,” while waving the striped transgender flags, “Antifa” banners, and the red flag of communism.

Notice the tall man with long hair and gray sweatshirt. After I pass him, he follows me, repeatedly jumps in front of me, pushes me back, and blocks my way. #WomenRise#WomenSpeak pic.twitter.com/CBpjodjVEk

Inside the library, the transgender activists disrupted the event with whistles and chanted, “transwomen are women.”

In response, the women chanted, “Let Women Speak,” and, “Kick Him Out,” and applauded the police who hustled the disrupters out of the room.

The feminists argued that women’s’ rights can only be based on society’s recognition that men and women are biologically different, even as they are also legally equal and socially complementary.

This “biology trumps gender” view is shared by many conservative groups, even though conservatives and feminists also disagree over related issues, such as abortion and the power that “civil rights” lawyers should have in governing Americans’ communities.

In contrast, pro-transgender groups — including university feminists — argue that biological sex must be subordinated to each person’s view of their own “gender identity.” That refers to each person’s feelings about whether they wish to present themselves as male or female. In practice, this revolutionary demand would require the government to punish ordinary Americans who refuse to tell their daughters that the men in their locker rooms are women and would force women to let their athletic events be dominated by men.

We — and by that, I mean the human race — we were supposed to have learned from those horrors [of World War II]. But if you had told me 20 years ago, that one day, I would not be able to speak in public unless surrounded by a phalanx of armed men. I would not have believed you. We expected authoritarianism from the right. We weren’t prepared for it from the left.

So a brief catalog of what the left is doing: Women have lost their jobs, they’ve lost their publishers. They’ve lost custody of their kids. They’ve been threatened so badly they’ve had to move, and they’ve been physically assaulted. The most basic facts of biology are now considered a hate crime, which means the reality of women’s lives are back to being unspeakable.

Children’s bodies, especially their future fertility and sexual function, are being destroyed, permanently. The worst part is that no one believes us.

Civic institutions that were built as a bulwark against power are crumbling. Journalists are afraid of losing their jobs — and if that doesn’t chill you, nothing will.

And people I counted as friends and comrades just want to keep their heads down so they can keep their jobs, hoping that the fever will break because this can’t go on. It can. That’s the thing. It can get worse. The left has become unrecognizable, and we are in terrible freefall, not because we’ve come on board, but because we’ve been thrown from the movements that we’ve spent our lives building. And for what? Knowing that a woman is an adult human female.

Science should not matter in debates over transgender rights in women’s sports, says credentialed Georgetown lawyer.

“This is taking away a women’s choice to say no,” says the response from Save Women’s Sports. https://t.co/JoCoXxMQaq

Meghan Murphy, the Canadian publisher of FeministCurrent.com, who faced down a bigger mob of pro-transgender activists in Toronto, spoke next:

This is the women’s’ movement … the same one that’s been around since the 1800s when women had to fight tooth and nail simply to be recognized as persons and be included in public life.

This is feminism. This is women’s liberation and those who are trying to stop us, to shut us down, to shut us up, to have us fired, to terrify us into silence with endless violent threats, who try to bully you all into staying home by screaming misogynist insults in your faces, simply for trying to participate in a conversation about women’s rights. These are the regressive, backward, anti-feminist authoritarians.

This is the backlash. This is the hate. This is the bigotry, which I like to remind people means intolerance toward those who hold different opinions from oneself.

There is manipulative rhetoric and efforts to frame this backlash as progress, but it is not. It is the same woman-hating and the same efforts to force us back into the home, back into silence, and back into fear as it always has been.

We are uppity women who dare speak the truth. And that is why they want to burn us at the stake. And we cannot stop saying this; we cannot stop reminding the world that this is true; we cannot stop telling and retelling history because history repeats itself when we don’t, as we are seeing today via the so-called trans rights movement.

I say “so-called” because I want to be clear that this isn’t about trans rights.

There are no rights being fought for trans people within this activism. The activists outside are not fighting to create services and safe spaces for trans-identified people, They’re certainly not fighting for the children told they’re trans because they like or dislike the color pink, being put on puberty blockers, hormones, and being put on a path to surgery and sterility.

I’m not being hyperbolic. If we can’t define women as adult human females and argue that women share a particular experience in this world, and have experienced historical oppression due only to having been born female, there is no basis for women’s rights.

We cannot defend women’s spaces and women’s organizing if there’s no such thing as a woman. Or, if a woman is anything anyone says it is, based only on a feeling, an announcement or an affinity towards uncomfortable shoes and lacy underwear.

The Seattle Times, the city’s premier establishment media outlet, declined to cover the content of the women’s speeches.