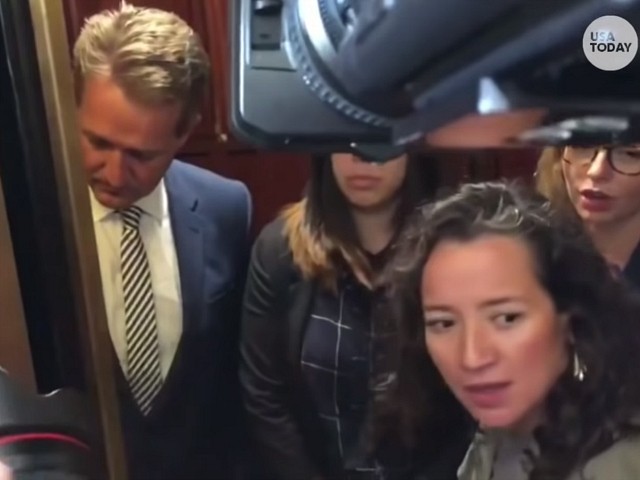 NEW YORK — Ana Maria Archila, one of the two women who confronted Arizona Republican Sen. Jeff Flake in an elevator on Friday, helps lead a progressive organization funded by billionaire George Soros that heads an $80 million activist effort characterized as part of the anti-Trump “resistance” movement.

Archila and a second woman, 23-year-old Maria Gallagher, both said that they survived sexual assault when they challenged Flake as he entered an elevator prior to his Senate Judiciary Committee vote on whether to approve the nomination of President Donald Trump’s Supreme Court nominee, Brett Kavanaugh.

Ultimately, Flake prompted a new FBI investigation into Kavanaugh as a condition for moving forward with the nomination. When asked whether the elevator confrontation contributed do his decision, Flake told the Atlantic that the moment had been “poignant” for him and “it certainly struck a chord.”

Flake credited his decision mostly to what he said was his desire to preserve the Supreme Court. “I don’t know if there was any one thing, but I was just unsettled,” he added.

Outside the elevator on Friday, Archila yelled at the senator: “What you are doing is allowing someone who actually violated a woman to sit on the Supreme Court.”

“This is not tolerable,” she added. “You have children in your family. Think about them.”

As reported by the Washington Free Beacon, Archila penned a piece posted on the CPD’s website taking credit for actions that left Flake “visibly shaken:”

Just a few hours ago, a courageous young woman and I confronted Senator Jeff Flake on an elevator about his statement that he would vote to confirm Brett Kavanaugh to the Supreme Court. In a now-viral video, Flake could not even look us in the eyes when we shared with him our experiences of sexual assault. He would not make eye contact with me when I asked him to think about my children, and his own children.

Shortly after, CNN reported that Flake was visibly shaken after his encounter with us. Our words, and the words of thousands of women who have shared their stories, moved him. Within hours, the senator announced he would seek an investigation from the FBI into Dr. Ford’s accusations of sexual assault by Brett Kavanaugh, delaying the Senate’s confirmation vote.

CPD is highly involved in anti-Trump activism. In May 2017, CNN reported that the Center for Popular Democracy Action fund unveiled an “$80 million effort to coordinate the work of dozens of smaller progressive groups from around the country” as part of what the news network characterized as the anti-Trump “resistance” movement. Just as she does with the parent group, Archila serves as co-executive director at the Center for Popular Democracy Action Fund.

Since it is a 501(c)(4) nonprofit political organization, the CPD action fund is not required to publicly release its donor list. However, the fund and its associated main group, Archila’s Center for Popular Democracy, both have been financed by Soros, as the Free Beacon reported.

The CPD and the Make the Road New York immigrant activist group, which has also been led by Archila, partnered last April to form another anti-Trump activist outfit calling itself Corporate Backers of Hate. That Corporate group aims to “name and shame” any companies they claim are either working with Trump or making money from what the group claims is Trump’s “anti-immigrant, anti-worker” agenda.

The anti-Trump Corporate group’s website is set up for activists to send messages to the CEOs and board members of nine major companies, including IBM, Disney, JPMorgan Chase, Wells Fargo, and Goldman Sachs.

“We are convinced they have the capacity to move the Trump Administration,” Archila told Time Magazine of the project last year. “And to the extent that they are quietly placating the behavior of this White House, they are just as complicit as Ivanka Trump.”

Writing at National Review, John Fund documented Archila’s ties to the CPD and also noted she is a national committee member of the Working Families Party, which has long had close links to the now-defunct, controversial ACORN.

Fund criticized the media for failing to detail Archila’s activism beyond cursory mention of her group:

I have no doubt that the vast majority of protesters who want to stop Brett Kavanaugh are sincere and are merely exercising their constitutional rights. But imagine if two women had cornered a Democratic senator in an elevator and demanded an investigation of who had leaked to the media Christine Blasey Ford’s letter alleging that Kavanaugh had sexually assaulted her. (Senator Lindsey Graham said today that he planned to investigate the leak.) There would have been sputtering outrage in media circles, and reporters would have breathlessly hunted down any ties between the women and outside groups.

It’s a sign of media bias that the people from the well-funded groups behind the anti-Kavanaugh protests are described merely as “activists” and that their political motives and origins are largely unexplored.