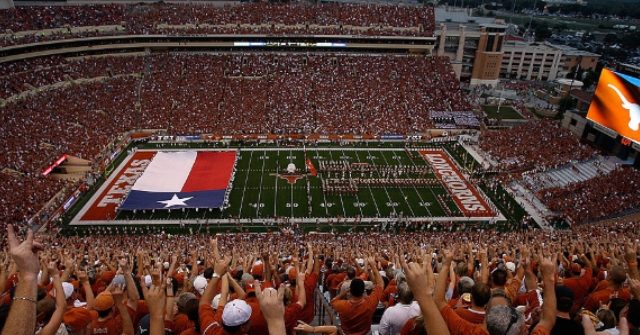 Football players at the University of Texas at Austin have released a lengthy list of demands, urging the university to change the name of buildings on campus — including the stadium — and eliminate “The Eyes of Texas” as the school’s song in the name of inclusivity, claiming the racism that “has historically plagued” the campus.

“The recent events across the country regarding racial injustice have brought to light the systemic racism that has always been prevalent in our country as well as the racism that has historically plagued our campus,” Texas Longhorns players said in a statement released on Friday.

While the players recognized the athletic department issued a statement “acknowledging these injustices and publicly supported the rights of student athletes using their voices to make change,” they asked the department — and university as a whole — to do more to “make Texas more comfortable and inclusive for the black athletes and the black community that has so fervently supported this program.”

The players provided a list of demands, which include the renaming of campus buildings. That includes Robert Lee Moore Hall, Painter Hall, Littlefield Hall, and James Hogg Auditorium. They also demand the “permanent removal of the James Hogg statue” and ask that statues around campus be replaced “with more diverse statues” which are “designed by artists/sculptors who are people of color.” Additionally, they demand the “inclusion of modules for incoming freshmen discussing the history of racism on campus” and incorporation of “racial injustice awareness.”

However, the stipulations do not end there, as players also asked the university to replace the school song, “The Eyes of Texas” with a new song “without racist undertones.”

The “Eyes of Texas,” which is played before and after every Longhorns football game, has come under scrutiny in recent years because it was first performed in a minstrel show, which featured blackface performances, in 1903.

According to the Texas State Historical Association, the University of Texas Board of Regents reaffirmed “The Eyes of Texas” as the university’s official song to celebrate the 100th anniversary of its first performance. It was performed by the Longhorn Marching Band at the funerals of both Royal, for whom Texas’ stadium is named, and former first lady Lady Bird Johnson. A copy of the original lyrics was taken to the moon in 1969 by university alumnus Alan L. Bean.

Players also demanded the athletics department, specially, to institute a “permanent black athletic history exhibit” and called on the department to “donate 0.5% of their annual earnings to black organizations and the BLM movement.”

The student athletes ultimately issued an ultimatum, stating that they will  “continue to practice, workout, and participate in all required team activities in preparation for the upcoming season” but “will not be participating in the recruiting of incoming players or donor-related events” without an official commitment from the university.

Texas Longhorns wide receiver Brennan Eagles shared the letter after telling his followers last week that he is “not going to play another snap knowing what’s going on in our society due to color and the system being broken, urging people to “look at the bigger picture.”