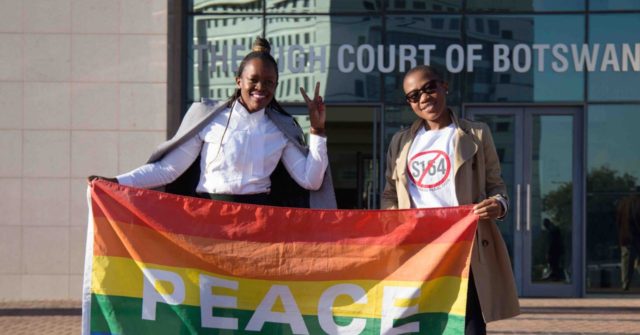 The southern African nation of Botswana decriminalized gay sex on Tuesday, as its high court overturned a colonial-era law on Tuesday barring the practice.

CNN reported that the decision was “a landmark victory for Africa’s LGBTQ movements.” It was also a victory for President Donald Trump’s foreign policy, which launched an initiative earlier this year aimed at decriminalizing gay sex in those countries that still outlaw it.

It is not clear why CNN neglected to mention the Trump administration initiative — though the network has often been at odds with the president. The mainstream media have focused in recent days instead on a controversy involving an order by the administration that the Gay Pride flag not be flown with the American flag at embassies abroad.

Nevertheless, it remains true that Trump has personally emphasized the campaign to decriminalize gay sex. On May 31, he tweeted in honor of LGBT Pride Month, reiterating his call for worldwide decriminalization.

As we celebrate LGBT Pride Month and recognize the outstanding contributions LGBT people have made to our great Nation, let us also stand in solidarity with the many LGBT people who live in dozens of countries worldwide that punish, imprison, or even execute individuals….

….on the basis of their sexual orientation. My Administration has launched a global campaign to decriminalize homosexuality and invite all nations to join us in this effort!

Trump published his message a week after Kenya’s high court had upheld a ban on gay sex, in a setback for the administration’s policy and the LGBT movement more generally.

There are roughly 70 countries that outlaw homosexual activity, and eight that punish it with the death penalty, according to the International Lesbian, Gay, Bisexual, Trans and Intersex Association.

Botswana is one of a handful of highly prosperous African countries, consistently achieving high economic growth over several decades, albeit with a small population.