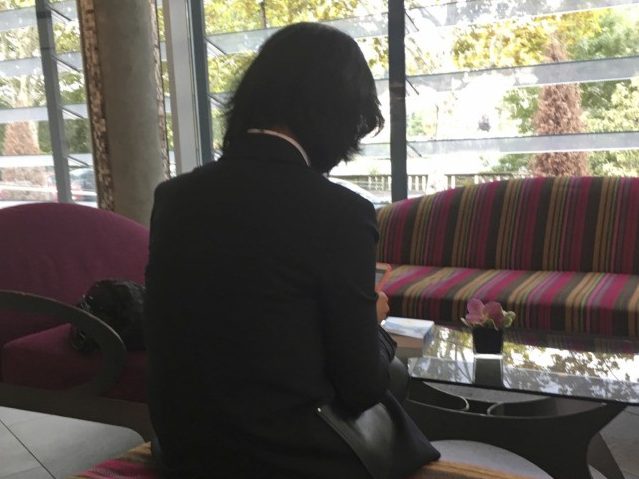 Grace Meng, wife of former Interpol President Meng Hongwei, began issuing a series of interviews last week, and most recently spoke to the Associated Press this weekend, urging the Chinese government to provide more information on her husband’s whereabouts and guarantee both of their safeties since Beijing admitted to arrested him early this month.

Meng disappeared on September 29 while on a trip to China from France, where he and his wife live and where Interpol’s headquarters are located. China’s Public Security Ministry announced on October 7 that authorities had arrested Meng, who spent decades in Chinese law enforcement before moving to Interpol, on charges of accepting bribes. Beijing has not confirmed to the outside world that Meng is alive or safe, however, and he has not been seen since the day he was reported missing.

Grace Meng told the Associated Press Saturday that Chinese authorities claimed to have a letter Meng had written her as proof of his wellbeing while detained. “They said my husband wrote a letter to me. They said they can only give it to me alone,” she noted.

The officials insisted, however, that she meet with them in private to receive it directly. Fearing for her safety, Meng says she has demanded to meet with an attorney and journalists present, or that the Chinese government hand over the letter to French police to give to her. She is reportedly awaiting a response.

She used her conversation with the AP to argue that, if the Chinese government can so swiftly apprehend the head of an international institution like Interpol, “everybody in China is at risk. Everyone should be concerned that something like this could happen to them.”

“The term anti-corruption in China has become a synonym for crimes that are unjustifiable,” she continued.

In a conversation with the BBC last week, she said she would begin speaking out publicly against the Chinese government in the hopes that public awareness could prevent them from arbitrarily arresting more people like they did her husband. “I don’t want any other wives and children like me,” she told the broadcast outlet.

She added in her BBC interview that, in addition to official communications from the Chinese government, she had begun receiving threatening phone calls, including one that told her not to speak, only to listen that “two teams [are] target[ing] you in France.”

“I think it is political persecution. I’m not sure he’s alive. They are cruel. They are dirty. This thing shows it means they can do anything, I can’t imagine,” she lamented.

The Chinese Foreign Ministry, addressing early reports that Beijing had begun threatening Meng into silence, accused her of “slandering” Xi Jinping, the head of the Chinese Communist Party.

“If Meng Hongwei’s wife is a Chinese citizen, it’s natural for Chinese diplomatic missions to contact her. Every government does so,” Foreign Ministry spokesman Lu Kang added.

Grace Meng’s attorney, speaking to French journalists, said that she may seek political asylum in France to do away with her Chinese citizenship, which she believes may make her more vulnerable to kidnapping or threats.

When Meng Hongwei first disappeared, Grace Meng told reporters, supplying images of the communications, that the last she heard from her husband was a message stating “wait for my call” followed by a knife emoji, which she interpreted as a sign he was in danger. There is no public confirmation of any existing communication from Meng since the emoji text was sent from his phone.

Interpol did reveal following China’s announcement of his arrest that the organization had received his resignation “with immediate effect, naming Senior Vice-President Kim Jong Yang as his acting replacement.” The statement did not specify via what medium that resignation came or if conclusive evidence existed that Meng was alive and safe in Chinese police custody.

Kim, who succeeded Meng, called his disappearance “regrettable,” adding, “we still don’t have sufficient information about what’s happening [with Meng] or whether it has anything to do with Chinese domestic politics.”

Inquiries as to his whereabouts and concerns for Meng’s safety have triggered responses from China similar to Lu Kang’s dismissal of Grace Meng’s remarks as “slander.” Shortly after Chinese authorities accused Meng of bribery, state-run media began publishing attacks on Western journalists for questioning Meng’s safety.

“The Western media deliberately used such words as ‘disappearing’ and ‘missing’ to attack China’s political system,” the Global Times claimed. “The Western media’s brouhaha stems from their disrespect for Chinese law and misunderstanding of China’s anti-corruption campaign.”

Chinese authorities began to turn on Meng when, early this year, Interpol rescinded a “red notice” for Dolkun Isa, the head of the World Uyghur Congress. Isa is a human rights advocate whose group exposes abuses by the Chinese government against members of the ethnic Uighur minority, activities which China deemed “terrorist” but Interpol, under Meng, did not.