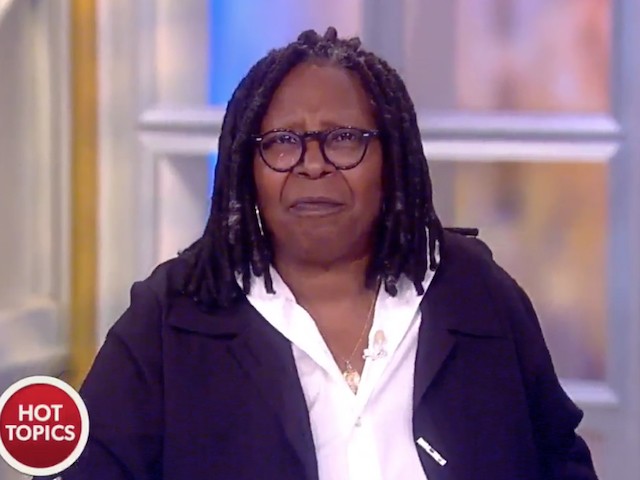 Monday on ABC’s “The View,” co-host Whoopi Goldberg criticized President Donald Trump for his comments about the California wildfires.

In a video clip from his California weekend visit, Trump said, “I was with the president of Finland and he said we’re a forest nation. He called it a forest nation. And they spend a lot of time on raking and cleaning and doing things and they don’t have any problem and when it is, it’s a very small problem.”

Goldberg said, “Actually, as you probably know, Finland has a very different atmosphere. They get rain periodically. California, it doesn’t rain much so raking really isn’t going to help. You know, just being realistic. And the Finnish president said he never suggested raking, you know. I don’t know why the new guy just won’t acknowledge that if you don’t have any rain, raking everything out is fine but if everything’s is dry someone drops a cigarette or someone lights the fire or, you know, some spark happens, stuff’s going to burn. Raking it is not going to really help. So I would like him to stop with this raking stuff.”

Co-host Joy Behar said, “When did he become an expert on forest fires? Who is he, Smokey the Bear all of a sudden?”

Co-host Sunny Hostin said, “It’s amazing, I have some really good friends that are from Finland and the Fins are having such a ball with this. There are memes online with them vacuuming the forest. My friend is sending me all this stuff but in a sense, we’ve almost become the laughing stock in so many places.”

She added, “And it’s just so embarrassing because if you know anything about Finland, it rains like half the year. It’s really cold.”

Goldberg said, “What I need him to do is shut up. And I try not to be, you know, I try not to be too rude, but you know what, people lost their lives. Families lost their homes. This is not a joke. Raking? I’m sorry. Raking is not funny to people in California. This is not cute, you know, this idea. And if you don’t know this, if you really don’t know this, man, everybody needs to start rethinking what you’re saying and how you’re saying it because you sure don’t give a damn about the people in California.”

She added, “I just want him to stop talking in California. People are dying. People died. People lost everything. Listen, if you’re not going to help stay home.”