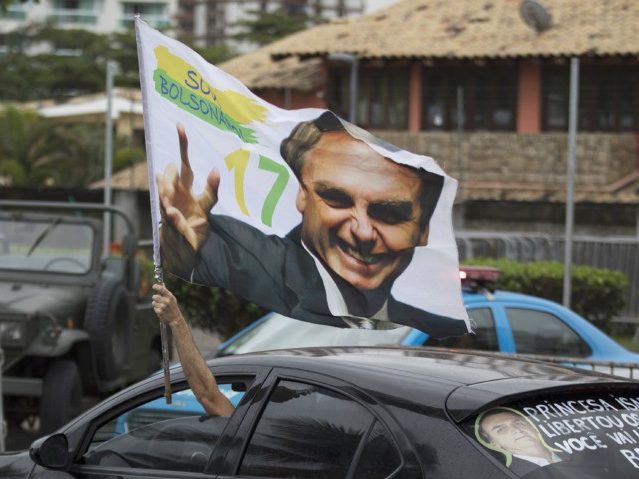 Jair Bolsonaro became president-elect of Brazil on Sunday in a stunning repudiation of the country’s left-wing political establishment.

Bolsonaro achieved an expected victory over his socialist opponent Fernando Haddad with around 55 percent of the vote, sparking political debate around the world. The 63-year-old former army captain is known for his hardline conservative and often controversial positions that he believes will push Brazil towards a new era of prosperity.

The centerpiece of Jair Bolsonaro’s campaign was his promise to crack down on soaring levels of crime in the country. Brazil currently documents over 60,000 gun deaths every year. Bolsonaro has proposed fighting against crime by expanding the military’s presence on the streets, increasing prison sentences, and giving the police more autonomy to open fire on suspected criminals.

As well as tackling violent crime, Bolsonaro has pledged to push for the prosecution of the dozens of left-wing politicians involved in the country’s “Operation Car Wash” corruption scandal that saw billions of pounds stolen from the public budget. One of those found guilty was former leftist President Luiz Inácio Lula Da Silva, who Bolsonaro has promised to keep in jail for the remainder of his 12-year sentence.

On the issue of abortion, he has pledged to block any loosening of Brazil’s abortion laws, as well as pull funding from NGOs that promote the practice.

Despite using some protectionist rhetoric, Bolsonaro has broadly committed to a policy of free market economics by promising to slash regulation, reduce taxes, privatize some state-run companies, and dramatically cut back the size of the government. Such measures won him the support of many within the business community, as well as people tired of the stagnant wages and weak economic growth that followed the economic boom and bust under the previous socialist administration.

As part of his promise to restore security to Brazil’s streets, Bolsonaro has promised to introduce gun rights for all “honest citizens” to help protect themselves against criminals.

“Every honest citizen, man or woman, if they want to have a weapon in their homes – depending on certain criteria – should be able to have one,” he said this month.

Bolsonaro appears to align with the Trump administration on most foreign policy issues and as such hopes to build a strong relationship with Washington himself.

Like Trump, he has repeatedly raised concern about the risks of increasing Chinese investment in Brazil, warning that it allows Beijing to exert too much influence on the country and the region as a whole.

He has also pledged to help efforts led by the United States to isolate the Maduro regime in Venezuela, as thousands of Venezuelans flee to Brazil every day in need of humanitarian assistance.

A staunch Zionist, he has also confirmed he will join the United States in moving Brazil’s embassy in Israel to Jerusalem, as well as closing the country’s embassy in Palestine.

“Is Palestine a country? Palestine is not a country, so there should be no embassy here,” he said in August.