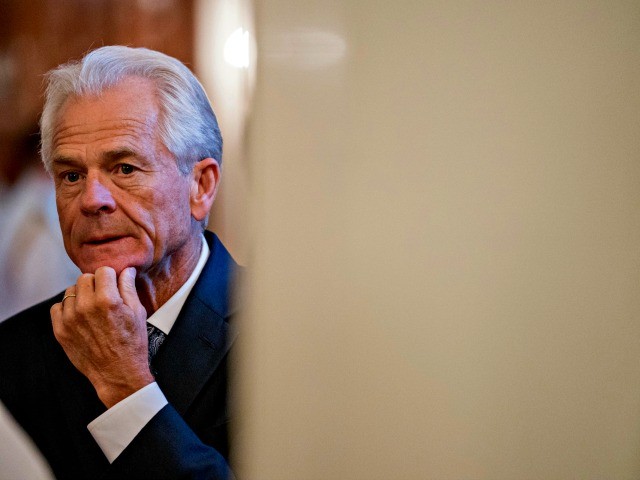 White House trade adviser Peter Navarro took Wall Street globalists and China to task on Friday, blasting them for trying to work against President Trump’s efforts to end unfair Chinese trade practices for the good of the American worker.

“President Trump has done an incredible job on trade. He has had the courage and wisdom to stand up to the globalist elites, to stand up to the countries of the world that are engaging in unfair trade practices, non-reciprocal trade, high tariffs, using [the] United States as the bank of the world,” Navarro said at the Center for Strategic and International Studies.

Navarro said a “self-appointed group of Wall Street bankers and hedge fund managers” were shuttling back and forth between Washington and Beijing, and warned them against trying to pressure the White House into making some kind of a deal to end a trade war with China.

“When these unpaid foreign agents engage in this kind of diplomacy — so-called diplomacy — all they do is weaken this president and his negotiating position. No good can come of this. If and when there is a deal, it will be on President Donald Trump’s terms, not Wall Street’s terms,” he said.

“If they want to do good, spend their billions in Dayton, Ohio, in the factory towns of America, where we need a rebirth of our manufacturing base.”

Navarro’s talk comes ahead of the G-20 summit in Buenos Aires, Argentina, where Trump is expected to meet with Chinese Presidentand discuss the ongoing U.S.-China trade war.

Experts say the Trump administration has caught China off-guard with its tough stance. Most administrations have talked tough on the campaign trail, but have eased up once in office. Trump, however, has not relented.

“China is sputtering. They’ve never been treated this way. Every administration in the past has always treated them with kid gloves,” the senior U.S. official told Breitbart News last month.

He said the Chinese were unwilling to recognize engaging in these strategies, making a deal impossible.

He said during a round of negotiations earlier this year, he and other advisers went to Beijing to negotiate with the Chinese. He said they put down a long list of demands. The Chinese refused to acknowledge U.S. concerns.

“What do we hear? ‘We don’t engage in cyber theft, we are the biggest victim of cyber theft, we don’t force technology transfers.’ How do you have a deal with somebody if they won’t even acknowledge your concerns? It is Alice in Wonderland,” he said.

He also accused China of trying to engage Washington in talks, while continuing unfair trade practices. “That’s all they want to do. They want to get us to the bargaining table, sound reasonable, and talk their way while they keep having their way with us.”

Navarro gave a comprehensive overview of Trump’s efforts to rejuvenate the American manufacturing and defense industrial base.

He said Trump’s maxim is “economic security is national security,” and he has applied it to tax cuts, deregulation, unleashing the energy sector and ending the war on coal, imposing steel and aluminum tariffs, and renegotiating trade agreements such as the the North America Free Trade Agreement (NAFTA).

“This is a man that wakes up every day and thinks about how to put men and women back to work. Men and women who work with their hands in our manufacturing base to rebuild our community. Guess what? It’s working,” he said.

“The rising wages are disproportionately being shared by the lower portions of the income stream — the Deplorables — the Trump voters — the people who voted this man into office,” he said.