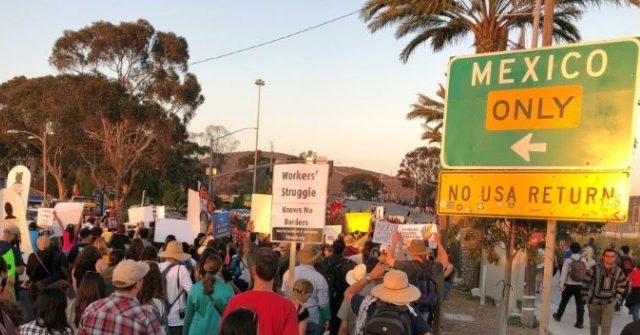 “These are things the president has been trying to implement since day one,” said Gidley of the Supreme Court’s ruling. “It’s just now getting around to having the courts rule on the fact what we already knew was the case, that the president has the authority under the Constitution to protect this nation.”

“The president has put things in place — whether they be regulations or policies — that have drastically reduced the amount of people crossing into this country,” added Gidley. “We’ve seen a 56 percent reduction in crossings in the last couple of months because of what this president has done.”

Gidley continued, “Mexico has helped a little bit in that. They are now keeping asylum seekers who are awaiting their day in court on the Mexican side of the border. Ninety percent of those cases are proven fraudulent, anyway.”

Prior to the the Trump administration’s policy changes, asylum claimants arriving through Mexico awaiting adjudication of their asylum claims “would just be released into American communities with nothing more than a piece of paper to say come back to court at some point,” explained Gidley, adding, “Now they’re waiting in Mexico.”

“Now the Supreme Court has ruled in our favor on a couple of cases, as well.” Gidley added, “That allows us to implement the policies this president is pushing forward, and that ultimately makes this country safer.”

“We’ve been saying that as Republicans for years, that this was kind of the dirty little secret of Democrat policy as it relates to guns — that they just want to end up taking all of your guns away from you — and they mock and they deride those of us who support the Second Amendment,” said Gidley.

Gidley continued, “To [Democrats], the Constitution is a buffet. They pick and choose the [amendments] they like, and then they turn their noses up [and] pass over the ones that they don’t like. Last night was a realization and a moment… in which the country finally saw what Republicans have been saying is one hundred percent correct.”

“The desire of the Democrat Party is to take away your guns, and now they are openly saying it,” concluded Gidley. “They don’t like the Second Amendment, and that’s pretty clear.”

“You’re seeing [Donald Trump’s] prediction… about Democrats trying to take guns coming completely true, and that should be scary for all Americans,” warned Gidley. “Even if you don’t like guns, it’s still a Second Amendment and a right that law-abiding citizens have, and that  they keep and hold dear.”

The National Rifle Association’s (NRA) popularity is a function of broad support for the Second Amendment, determined Gidley.

“Keep this in mind, while the NRA is a whipping boy — a bogeyman, if you will — there are about five million members to the NRA,” Gidley noted. There are about 150 million gun owners [and] 4oo million guns in this country.”