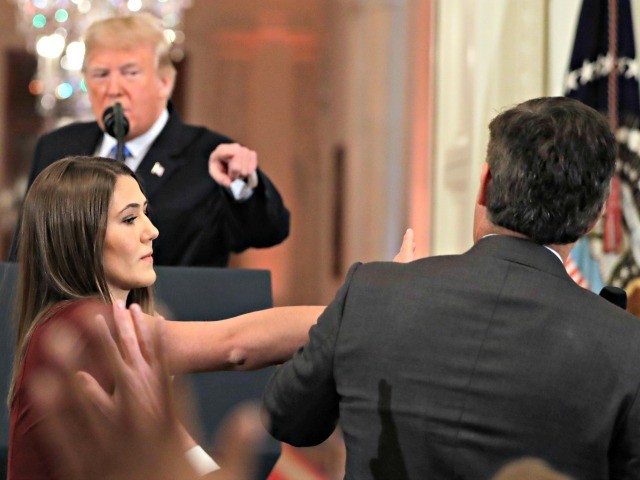 The White House on Wednesday evening suspended CNN reporter Jim Acosta’s White House press room pass after a combative exchange with President Trump in which he refused to give up the microphone and wrangled with a female intern trying to take it back.

“President Trump believes in a free press and expects and welcomes tough questions of him and his Administration. We will, however, never tolerate a reporter placing his hands on a young woman just trying to do her job as a White House intern,” White House Press Secretary Sarah Sanders said in a statement.

“This conduct is absolutely unacceptable. It is also completely disrespectful to the reporter’s colleagues not to allow them an opportunity to ask a question.”

President Trump has given the press more access than any President in history. Contrary to CNN’s assertions, there is no greater demonstration of the President’s support for a free press than the event he held today. Only they would attack the President for not being supportive of a free press in the midst of him taking 68 questions from 35 different reporters over the course of an hour and a half – including several from the reporter in question. The fact that CNN is proud of the way their employee behaved is not only disgusting, it is an example of their outrageous disregard for everyone, including young women, who work in this Administration. As a result of today’s incident, the White House is suspending the hard pass of the reporter involved until further notice.

The exchange happened Wednesday afternoon as the president was giving a press conference to discuss the results of the midterm election. Acosta began his question by saying he wanted to challenge him on calling the caravan an “invasion.”

“As you know, Mr. President, the caravan was not an invasion. It’s a group of migrants moving up from Central America towards the border with the U.S. Why did you characterize it as such?” he asked.

“Because I consider it an invasion. You and I have a difference of opinion,” Trump responded. Acosta then asked if he thought he “demonized immigrants” in the midterm election.

Acosta then followed up with an assertion that migrants in the caravan would not be climbing over walls, and that they were “hundreds and hundreds of miles away.” “That’s not an invasion,” he told Trump.

Trump told Acosta, “Honestly, I think you should let me run the country, you run CNN — and if you did it well, your ratings would be much better.”

Acosta then attempted to ask another question, but Trump tried to move on several times. Acosta repeatedly refused to give up the microphone. When a female intern tried twice to take back the microphone, Acosta pushed her arm away.

Acosta then asked two more questions before the intern succeeded in taking the microphone away.

Trump told Acosta, “I’ll tell you what: CNN should be ashamed of itself having you working for them. You are a rude, terrible person. You shouldn’t be working for CNN.”