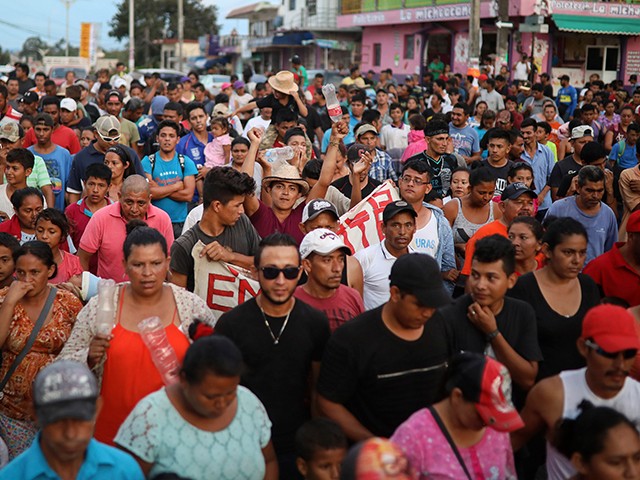 “While we are passionate about solving the issue of illegal immigration, we are not angry at one another,” Saunders wrote, shortly after the shouting match outside the Oval Office was described by many media outlets. She continued:

However, we are furious at the failure of Congressional Democrats to help us address this growing crisis. They should be ashamed for pushing an open borders agenda and are only doing this for strictly political reasons. Despite us having the worst laws in the world and no help from democrats, our Administration is doing a great job on the border.

Saunder’s response came after media outlets said the argument began when Bolton criticized Kirstjen Nielsen, a former aide for Kelly who is now the Secretary of the Department of Homeland Security.

President Donald Trump has been unable to stop the quasi-legal migration of Central American job-seekers across the border, largely because pro-migration Democrats and business-first Republicans have rejected his “Four Pillars” reform plan, short-changed his border-wall construction program and rejected his requests for additional enforcement agents and detention beds.

Liberal judges have also blocked actions by the Department of Homeland Security, including efforts to quickly process the economic migrants’ weak legal claims for asylum. Less than 5 percent of the migrants from prior years are being approved for asylum, but judges insist that job-seeking migrants be allowed to freely apply for asylum in backlogged courts.

From October 2017 to the end of August 2018, 136,000 migrants walked across the border, joining hundreds of thousands who have arrived since roughly 2010. That mass migration is also being amplified by a new caravan of several thousand job-seeking Central American migrants who now heading for California, just three weeks before the November election.

The migration has been underway since 2010. It is organized by labor-trafficking cartels, supported by U.S. and foreign pro-migration groups, funded by U.S. employers who hire low-wage migrants instead of working-class Americans and is not obstructed by a divided Congress. For example, Senate Democrats — led by Montana’s Sen. Jon Tester — have rejected Trump’s request for funds to operate 52,000 detention beds in 2019 and instead agreed to fund for only 40,520 detention beds.

The cartels’ labor-trafficking business is earning billions of dollars in smuggling revenue, partly because the catch-and-release process allows migrants to get work in the United States and pay off their debts. But that huge movement of cheap labor — at least 400,000 work-permits in 2017 — is clipping wages for blue-collar Americans, including many Democratic voters.

This month, the growing wave of migrants has overwhelmed the detention facilities on the border and has required officials to catch-and-release many migrants instead of enforcing Sessions’ anti-migration policies.

Trump is now citing the migration wave — including the caravan — to slam Democrats’ open-border policies.

I am watching the Democrat Party led (because they want Open Borders and existing weak laws) assault on our country by Guatemala, Honduras and El Salvador, whose leaders are doing little to stop this large flow of people, INCLUDING MANY CRIMINALS, from entering Mexico to U.S…..

Republicans must make the horrendous, weak and outdated immigration laws, and the Border, a part of the Midterms!

If the GOP keeps a House majority after the election, Trump will be able to use AG Sessions’ reform policies to block the migration, even if the Democrats successfully block wall construction.