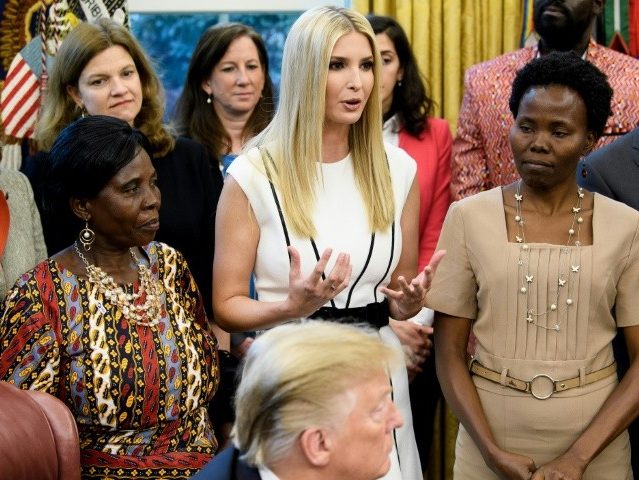 The White House is working to empower women around the world, thanks to a new initiative sparked by President Donald Trump’s daughter Ivanka.

“She’s amazing. Ivanka’s really done a wonderful job in leading this initiative, and being able to have the first ever whole-of-government approach in making sure that we can advance women’s rights and women’s full participation in the global economy,” White House director of strategic communications Mercedes Schlapp said Thursday in an interview with Breitbart News Daily host Alex Marlow on Sirius XM Patriot Channel 125.

The goal of the initiative is to reach 50 million women in the developing world by 2025, using $50 million from the U.S. Agency for International Development and private partners such as UPS and Pepsi.

“The president is really re-analyzing in how we use foreign assistance,” Schlapp said.

She explained that Trump’s administration wanted to stop sending foreign aid to countries that hated the United States and try to strengthen economic opportunity around the world.

“American women demonstrate every day that when women are free to thrive and prosper, they create jobs, strengthen our communities, and bring greater peace and prosperity to our nation and all over the world,” President Donald Trump said on Thursday during his memorandum signing ceremony.

Agree that women’s economic development is a necessity for good foreign policy. Thank you Secretary Rice for supporting #WGDP! https://t.co/FuxwMiJzna