The White House conceded Monday they were not requiring border crossers to show proof of vaccination, even though the government requires proof of a vaccine or a negative coronavirus test for other travelers into the United States.

When reporters asked about the apparent double standard on vaccination requirements, White House press secretary Jen Psaki argued that illegal immigrants and migrants crossing the border were not intending to stay in the United States.

“They’re not intending to stay here for a lengthy period of time,” she said, referring to migrants. “I don’t think it’s the same thing. It’s not the same thing.”

Nearly 15,000 immigrants, mostly from Haiti, have created a makeshift camp under the Del Rio International Bridge on the border of Texas and Mexico as they seek entry to the United States.

On September 10, Psaki admitted there was a double standard for migrants crossing into the United States and American citizens working for private businesses with over 100 employees under the Biden administration’s vaccine mandates.

“That is correct,” she said when a reporter pointed out the double standard. 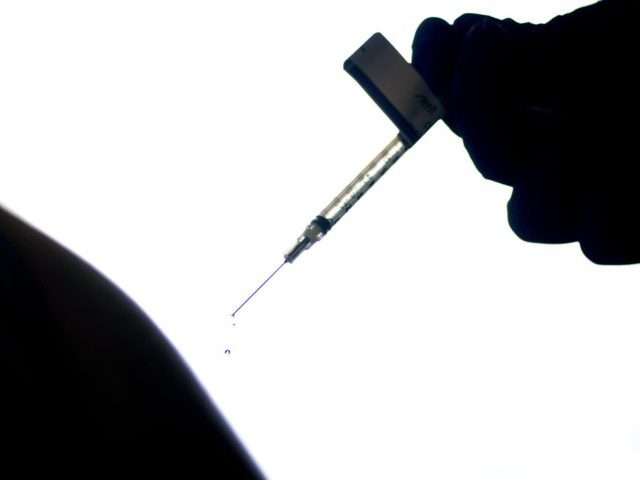 In this Dec. 15, 2020, file photo, a droplet falls from a syringe after a person was injected with the Pfizer COVID-19 vaccine at a hospital in Providence, R.I. (AP Photo/David Goldman, File)

Psaki repeated her prepared talking points about the coronavirus process for migrants crossing the border and “the intention” to quarantine individuals demonstrating symptoms of the virus.

About 30 percent of migrants held in detention facilities have refused vaccines, according to reports.

She said the United States continued using Title 42 authorities to expel some of the migrants from Haiti crossing the border into Texas.

“We want to prevent a scenario where large numbers of people are gathering, posing a threat to the community and also the migrants themselves,” she said.