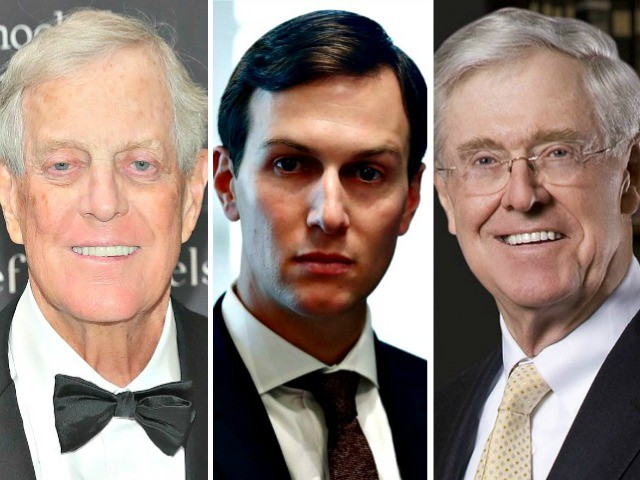 White House aides are asking business groups — including advocates for the Koch network — what they want to include in a wall-for-amnesty immigration deal, according to Axios.

One of those officials said [top aide Jared] Kushner has almost exclusively been talking to Republicans to figure out what they want out of a reform package. His planning sessions are “about defining what we’re for, not what we’re against.”

“Right now [Kushner is] just trying to understand the Republican position so that we can take all those views to the president and he can make an informed decision,” the same official said on Tuesday.

“This is more of a long-term policy process, not a resolution for the shutdown,” the official added. “And amnesty was not discussed at any of these meetings. This is really about how do we reform our broken immigration system.”

For more than a decade, Congress has grappled with the vast wishlist presented by investors, high-tech employers, the chambers of commerce, universities, seasonal employers, farmers, real-estate developers, immigration lawyers, and many other groups.

But that wishlist is almost entirely the opposite of preferences held by the blue-collar voters who elected President Donald Trump in 2016 and by the white-collar votes who may defeat him in 2020.

For decades, employers and investors have argued that the immigration system is broken because it does not deliver them enough cheap workers and enough new consumers.

Former President George W. Bush tried to reconcile investors’ open-ended demands for cheap workers and more consumers with the self-interest of the GOP by pushing for a law that would allow companies to hire an unlimited number of non-voting visa workers. Bush’s “any willing worker” plan was blocked, but Congress instead proposed the open-ended “Probationary Z Visa” in 2007. The Z visa plan offered work permits to all migrants who reached the United States within one year — and gave border officials just 24 hours to prove the migrants’ documents were fakes. The ambitious proposal quickly failed.

Similarly, in 2013, the business sectors’ wish list was included in the huge “Gang of Eight” amnesty bill. For example, the bill sought to flood the middle class labor market by offering two ways to provide green cards to an unlimited number of foreign graduates. In fact, the amnesty bill so skewed the labor market towards investors that the Congressional Budget Office reported, “the rate of return on capital would be higher [than on labor] under the legislation than under current law throughout the next two decades.”

The 2006 and 2007 amnesty plans were so unpopular among voters that Bush’s poll ratings sank from roughly 45 percent at the start of 2006 down to roughly 35 percent at the end of 2007, and then-Sen. Barack Obama used his opposition to build his 2008 outsider campaign. In 2014, the Senate Democrats lost nine seats after voters rejected the cheap labor amnesty.

But the business sector is loudly pushing for similar goals today.

Landscaping, forestry, hospitality, and seafood companies want extra H-2B visas to import cheap seasonal workers. For example, an H-2B expansion rule was hidden inside the GOP’s compromise border security plan that was rejected in January by Senate Democrats. Many companies are desperate for more H-2B workers because the companies which do not get some of the roughly 100,000 H-2B workers will lose contracts and profits to the companies which do get H-2B workers by hiring consultants, lawyers, and labor brokers. No business groups are asking the federal government to level the playing field by ending the H-2B program.

Lobbyists for technology investors want to import more visa workers who have college degrees. Currently, white-collar wages are suppressed by the H-1B and other visa programs which keep roughly 1.5 million foreign white-collar visa workers in jobs throughout the U.S. economy. The goal of more cheap graduates was endorsed in July by the GOP-run House appropriations committee but was blocked in November when GOP Rep. Kevin Yoder lost his Kansas seat in a suburban middle class district. Yoder’s proposal, dubbed HR392, would have ended the so-called “country cap” on green card allocations, so rewarding Indians who sign up for several years of low wage labor in the United States.

Many American universities are also eager to help companies import more visa workers. In 2013, for example, universities worked with business leaders to add sections to the amnesty legislation which allowed them to trade green cards to an unlimited number of foreign graduate students in exchange for tuition fees. House Republicans legislators quietly resisted the 2013 amnesty plan — and their opposition was explained in June 2014 when GOP primary voters defeated the GOP’s Majority Leader, Eric Cantor. In 2019, universities — backed by information technology investors — are trying to protect their “Optional Practical Training” program from a threatening lawsuit. The OPT brings hundreds of thousands of fee-paying foreign students into universities — and it also places hundreds of thousands into jobs which are sought by young graduates who can vote in the 2020 election.

Wall Street investors describe their immigration-related goals as national “economic growth.” That goal of a bigger economy is greatly aided by imported consumers. Investors also want to lower payrolls because every extra dollar in profit creates roughly $15 in stock value on Wall Street. But Trump’s Inauguration Day promise of a “Hire American” policy is slowing the arrival of new consumers and is nudging up investors’ payroll costs before the 2020 election. The investors’ demand to junk the “Hire American” policy is at the core of the bipartisan effort to block Trump’s c reforms.

Trump’s “Hire American” policy beats Jeff Bezos: In January, Bezos asked for a DACA amnesty to stop an ‘impending workforce crisis.’ But the crisis turns out to be Bezos having to pay $15/hr starter wages for all Amazon workers. More crises, please! https://t.co/kh9xfokZpJ

The Koch lobbying group includes many unrecognized investors and CEOs who gain when immigration adds to the four million Americans who turn 18 each year. The Koch brothers’ high tech oil industry business is not reliant on cheap labor or new consumers, but the group’s real estate owners, consumer industry CEOs, and the Wall Street investors gain as the federal government inflates the annual labor supply and drives up demand for apartment rentals, groceries, advertising, and entertainment.

Silicon Valley investors are insisting they want a DACA amnesty for roughly three million migrants, most of whom work in lower skill jobs. That amnesty goal is not billionaire altruism because lobbyists recognize that a quick DACA amnesty will prevent Trump from trading a DACA amnesty during 2019 for congressional approval of his Four Pillars agenda. Trump’s agenda includes reducing chain migration, ending the visa lottery, and reforming asylum laws. Groups such as FWD.us oppose that agenda partly because it would further reduce the inflow of cheap workers and extra consumers sought by investor-backed companies such as DoorDash, which is a food delivery company.

Farmers want cheap labor partly because they are facing growing international competition and because they are reluctant to pay the up front costs of American-made labor saving machinery, such as automated crop picking machines or robotic cow milkers. In 2018, Republicans endorsed the H-2C visa-worker program to provide farmers and meatpackers with at least two million visa workers. That effort failed, and in 2019, administration officials are trying to provide additional farm workers via the uncapped H-2A visa worker program. However, the H-2A farm workers cost too much and should be reformed to cut payroll costs, say farm industry groups.

The many chambers of commerce around the nation reflect the preference of small businesses, ranging from apartment landlords to car salesmen, and groceries, both large and small. Those groups win more sales when the federal government imports roughly 1.1 million new consumers each year — and they lose sales and employees when Trump’s deputies repatriate illegal immigrants or if a border barrier and legal reforms deter illegal migration. The U.S. Chamber of Commerce argued against the wall in 2015, saying any curbs must be offset by a legal inflow of unskilled workers:

“A wall, more fencing, or other security measures at the border are best evaluated while also creating channels for workers to come to the United States to fill available jobs,” said Randel K. Johnson, the senior vice president for labor, immigration and employee benefits issues at the U.S. Chamber of Commerce. He later added that “an orderly system of legal temporary worker programs that includes background checks for migrants seeking work would enhance security and shrink the haystack for law enforcement to focus on criminals and others.”

It’s a message that Johnson and the Chamber have been championing for years. During a Senate hearing in March, Johnson testified that “expanding temporary worker programs for lesser-skilled occupations, when properly structured, will be good for the economy and will clearly enhance U.S. security and border control.”

Numerous polls show that Americans want to like and welcome migrants — and that most of those Americans also oppose the cheap labor immigration which displaces Americans, drives down wages, threatens neighborhoods, and damages schooling.

Those voters’ views are not being touted by industry lobbyists in White House meetings, nor are they highlighted by pro-migration media on the talk shows. But these voters put Trump into the White House in 2016 — and these voters have the power to send Trump and his aides back to New York in 2020.

Still one of the most telling charts of voter-profiles from recent election. The results: There is no support for economic libertarianism across U.S. Source: https://t.co/u5u99K1nW1 pic.twitter.com/TfenFo8FZa

That annual flood of roughly one million legal immigrants — as well as visa workers and illegal immigrants — spikes profits and Wall Street values by shrinking salaries for 150 million blue-collar and white-collar employees, and especially wages for the four million young Americans who join the labor force each year.

Immigration also steers investment and wealth away from towns in Heartland states because coastal investors can more easily hire and supervise the large immigrant populations who prefer to live in coastal cities. In turn, that coastal investment flow drives up coastal real estate prices and pushes poor U.S. Americans, including Latinos and blacks, out of prosperous cities such as Berkeley and Oakland.