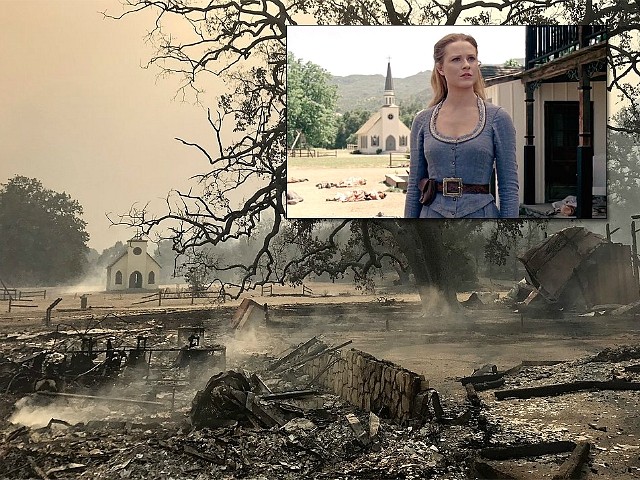 A famed old west town often used as the backdrop for some of the most iconic and popular TV shows, like HBO’s Westworld, and films has burned to the ground in the Woolsey, California, wild fire, reports say.

The old west town at Paramount Ranch in Agoura Hills has reportedly been destroyed by fire, according to a tweet from the Santa Monica Mountains Recreation Area.

We are sorry to share the news that the #WoolseyFire has burned Western Town at #ParamountRanch in Agoura. We do not have any details or photos, but it is our understanding that the structures have burned. This area is an active part of the incident and we cannot access it. pic.twitter.com/oC4n7KR8ZT

The officials did not post images of the destruction, but others have been able to get to the scene. “Sad for fans of @WestworldHBO and shows like Dr Quinn Medicine Woman, the Paramount Ranch western town movie set has burned to the ground in the Woolsey Fire @CBSLA #westworld #Woolseyfire,” photojournalist John Schreiber wrote.

Sad for fans of @WestworldHBO and shows like Dr Quinn Medicine Woman, the Paramount Ranch western town movie set has burned to the ground in the Woolsey Fire @CBSLA #westworld #Woolseyfire pic.twitter.com/DhZWaGbr6g

BREAKING: The Paramount Ranch filming location in Agoura Hills, California, where #Westworld shot many scenes, has burned down due to wildfire. (photo credit: @johnschreiber) pic.twitter.com/ZKUKtawSpe

CBS News was also able to get a camera crew to the survey the destruction:

NEW: Paramount Ranch in Agoura Hills, Calif., the historic Western town area at where productions including “Westworld” have filmed, burned down Friday in the #WoolseyFire, according to @SantaMonicaMtns https://t.co/M3JzL4R9jT pic.twitter.com/0LfRCsV3jz

The town has served as a set for a long list of famous films and TV shows including Dr. Quinn Medicine Woman, American Sniper, Norbit, The Love Bug, and The Adventures of Tom Sawyer, among many others.

The deadly wildfire has already destroyed several thousand buildings and engulfed several thousand acres, displacing nearly 30,000 people, according to California authorities. The fire also forced the producers of Drunk History to shut down near the King Gillette Ranch in the Santa Monica Mountains, The Hollywood Reporter reported.

Follow Breitbart News’ live wire here for all the latest updates on this devastating wildfire.