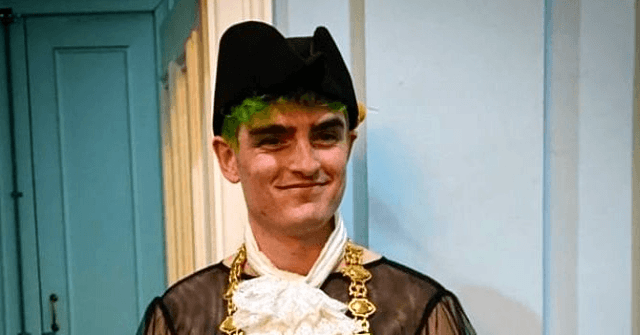 Bangor City Council in Gwynedd, Wales, has appointed what is claimed to be the world’s first “non-binary” city mayor.

22-year-old Owen J Hurcum, who is also the youngest mayor in Bangor history, was elected as a councillor for the Welsh separatist Plaid Cymru party — despite originally being from Harrow, London — as a teenager, but now sits as an independent, having resigned from the leftist party after they selected an alleged “TERF” (Trans-Exclusionary Radical Feminist) as a candidate for the Welsh Assembly elections.

Hurcum, who is described as “Genderqueer/Agender (they/them)” on a Twitter account decorated with Welsh, Trans Pride, Gay Pride, and European Union flags, was appointed to the role by fellow councillors, and quoted by WalesOnline as saying: “I really want to use my personal position to bring PR for Bangor. Bangor is really a melting pot of cultures and identities, and that’s what makes it so great.”

When I came out two years ago I was so worried I’d be ostracized by my community or worse. Today my community elected me Mayor of our great City. The youngest ever Mayor in Wales. The first ever openly Non-Binary Mayor of any city anywhere. Beyond humbled, Diolch Bangor 🏳️‍🌈 pic.twitter.com/pGHiaQTVaO

Hurcum said that, while “City councils have a reputation of being full of old stuffy people with out of date ideas and out of touch policies,” in the case of Bangor “that couldn’t be further from the truth.”

“The city council that I have the pleasure of being in is fantastic,” Hurcum revealed.

“Everyone is not only working their hardest, but when I came out and went to meetings, I came out whilst being a city councillor, the response [was] I just want to support you and how can I do that.”

Hurcum discussed the subject of gender identity more personally in comments quoted by North Wales Live, explaining: “I came out as genderqueer nearly a year and a half ago.”

“For a long time, I was confused, and all this conflicting stuff meant that I was missing a lot of things. That’s when I decided to dye my hair, because it was a way to express and not be placed in a box. I felt much better about myself,” Hurcum continued.

“I’m not blind to the fact that, when there’s a new system coming in, especially when the head of that system is a 22-year-old, gender-queer and purple-haired person, people are going to notice that.

“If that’s what will attract people to Bangor and see how great it is, I’m more than happy about that. I think in this system, being a bit different does help.”

According to the Metro, Hurcum’s reported status as “world’s first non-binary city mayor” is disputed, with some arguing one Georgina Beyer claimed that title in Carteron, New Zealand in 1995.