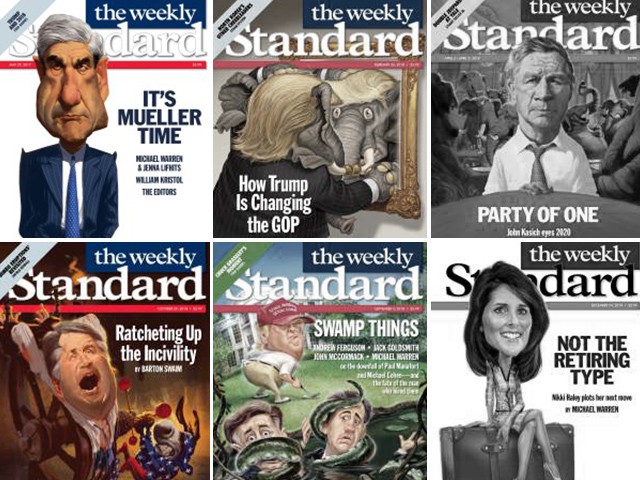 The Weekly Standard, a conservative opinion magazine turned Never-Trump publication, will shut down, according to a Friday announcement from the publisher’s owner, Clarity Media Group.

Earlier Friday, Weekly Standard editor-in-chief Stephen Hayes sat down with MediaDC chairman Ryan McKibben to discuss the magazine’s fate. Hayes sent a letter to employees notifying them of this morning’s meeting with McKibben, saying he was “not sure what today will bring”

“This is a volatile time in American journalism and politics,” Hayes’ letter to staffers read. “Many media outlets have responded to the challenges of the moment by prioritizing affirmation over information, giving into the pull of polarization and the lure of clickbait.”

Further, the magazine’s editor-in-chief said it was “profound honor” to work The Weekly Standard‘s roster of reporters, adding, “I’m proud that we’ve remained both conservative and independent, providing substantive reporting and analysis based on facts, logic and reason.”

The magazine will post its final edition on December 17, according to CNN.

Earlier December, Hayes told staffers that he was uncertain about the magazine’s future amid sagging readership and a fruitless attempt to find a buyer.

“The Weekly Standard has been hampered by many of the same challenges that countless other magazines and newspapers across the country have been wrestling with,” McKibben said in a statement, obtained by TheWrap. “Despite investing significant resources into the publication, the financial performance of the publication over the last five years — with double-digit declines in its subscriber base all but one year since 2013 — made it clear that a decision had to be made,” added McKibben. “After careful consideration of all possible options for its future, it became clear that this was the step we needed to take.”

News of The Weekly Standard’s shuttering comes after its parent company announced that the Washington Examiner – also owned by Clarity Media Group – will relaunch its weekly print magazine with nationwide distribution and larger editorial focus.

Media observers floated a possible merger between the two publications.

The Weekly Standard, a once-influential neoconservative magazine, was co-founded by Bill Kristol and Fred Barnes in 1995 and published by Newscorp.