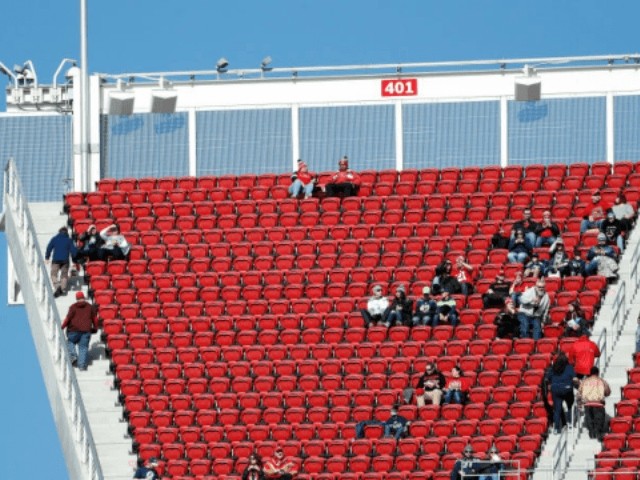 We don’t yet know what the TV ratings for Week 2 of the NFL season will be. However, ratings aside, the league is still suffering very low attendance numbers.

Last week’s games for Sunday Night Football fell once again over the previous season with the September 9 slate of games down 9 percent over the 2017 season’s openers.

By Monday the numbers looked better for the league, but even as the ratings were rosier over 2017’s numbers, factoring in the fact that TV ratings were in the dumper across the board for the same weekend in 2017 because of Hurricane Irma, the numbers are less spectacular than they appear.

According to a post at the Twitter account, Empty Seats Galore, Los Angeles Rams fans “are already fed up” with the league and many empty seats were seen at Sunday afternoon’s game.

(1/X) RT @therichreport: @[me] Home opener for the LA Rams, but the fans are already fed up. #AZvsLA pic.twitter.com/eSCrzgOksf

Next, according to ESPN, the Washington Redskins had a crowd of 57,013 out of its 82,000 seating capacity at FedEx Field.

There also seemed to be quite a few seats open as the Buffalo Bills took on the Los Angeles Chargers at Ralph Wilson Stadium.

“@pbhockey04: @[me] I can’t take a pic of it but lots of empty steats for the Bills/ Chargers game… Bills fans fed up with the losing” (https://t.co/iuowo1TJUe) pic.twitter.com/agLBq1Pfjn

The Eagles and Buccaneers weren’t able to bring too many to Tampa’s Raymond James Stadium either, according to tweets.

Even the Titans and Texans showed a large number of empty seats in Nashville, Tennessee.