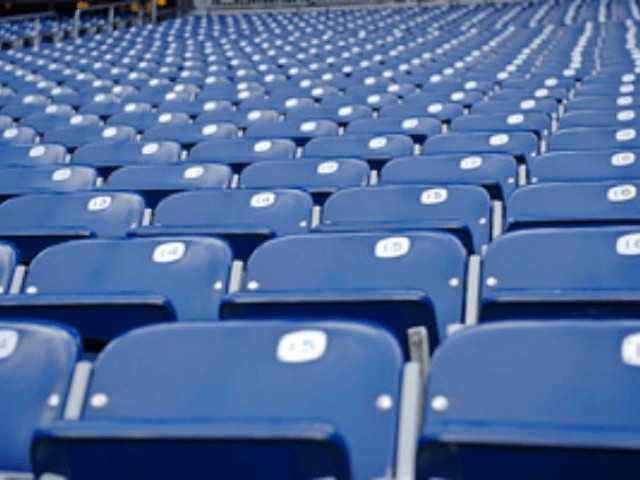 As the NFL’s Week Six kicked off across the country, it still looked as if stadium attendance had not rebounded despite the small increase the league has seen in the television ratings.

Last week, with national anthem protests nearly extinguished, the league was encouraged by news that ratings had stopped sliding and that there was even a modest three percent gain after two seasons of losing viewers. However, though fans may no longer be abandoning their TVs, the same cannot necessarily be said of in-person attendance at the games.

For instance, the NFL has hopes for expanding the reach of the game by playing in foreign locales such as Britain’s Wembley Stadium. But according to those watching on TV and in attendance, there were thousands of empty seats in the grand stadium as the Seattle Seahawks dominated the L.A. Raiders in London.

The league said a huge number of tickets were sold, but fans aren’t convinced:

What’s with all the empty prime seats at Wembley? I was told the game was sold out. Not fair to fans who wanted to travel to London. 🏈 #seattleseahawks #oaklandraiders #SEAvsOAK #NFLLondon #NFLLondon #seahawks pic.twitter.com/zlhsHvwbpA

Might of sold that many tickets but never that number through the gates going by empty seats I’d say 78k max, ticket touts had loads left at kick off too

So many empty seats, no way it was that many

Things were just as dodgy back home as the Atlanta Falcons edged past the Tampa Bay Buccaneers 34-29. Falcons fans seemed to have their pick of thousands of empty seats at Mercedes-Benz Stadium:

Plenty of empty seats at the Mercedes Benz Stadium for the Falcons game. @EmptySeatsPics pic.twitter.com/kLWufW5UhF

Excited to be at Bucs Falcons game in ATL. Loooooooooots of empty seats at kickoff if you can get here… pic.twitter.com/LV6F3DISxy

A lot of empty seats. pic.twitter.com/oi9Dmk11W3

🍌✊✊✊ – ppl who only look at this feed on Sunday afternoons RT @aussiebeastmode: Plenty of empty seats at the Mercedes Benz Stadium for the Falcons game. @[me] pic.twitter.com/QEGpyxPejU

More #batin material for my Sunday-only followers #TBvsATL RT @StantonDeliver: @[me] ATL fans fed up with roof being open and sun blaring down on them in the field level seats pic.twitter.com/qNYelIDAS7

The Cincinnati Bengals got beat by the Pittsburgh Steelers 28 to 21, but few were in the stands at Paul Brown Stadium, to see it:

We always lose that way under Marvin. If @Bengals wanna keep the fan base they better fire him. Take note of empty seats for first place team.

Do the Bengals have an attendance problem? A lot of empty seats for such an important divisional game.

Likewise, as the Denver Broncos take on the Rams (with the Rams beating up on the Broncs by the third quarter at press time), fans at Sports Authority Field may have decided to take in other local activities in the Mile High City:

ERly but seemingly a lot of empty seats @Broncos pic.twitter.com/kNozFadZiW

A lot of empty seats at mile high….. @broncos do what needs to be done already. Rip the Bandaid off.

Never seen so many empty seats at a @Broncos game

NRG Stadium in Houston also seemed to have trouble turning out fans as the Houston Texans topped the Buffalo Bills 20-13:

Paid attendance but there ain’t no 71,638 ppl in here, lots of empty seats pic.twitter.com/E7sLHVVr0B

There are a lot of empty seats at NRG Stadium less than ten minutes before kickoff. pic.twitter.com/dYWiGh2rNw

The fans inside NRG Stadium are doing their part on Battle Red Day by leaving the red seats empty pic.twitter.com/GnVBCGe57C

Despite a high-scoring game with a 42-34 final as the Indianapolis Colts lost to the New York Jets, some said MetLife Stadium was full of empty seats:

We were shocked at the amount of empty seats at the last #Colts home game. Expect a stunning amount next Sunday vs Buffalo.

With the Tennessee Titans still battling the Baltimore Raves at Nashville’s Nissan Stadium at press time, some fans said there were plenty of seats to be had:

Finally, the Cleveland Browns were stomped 38-14 by the Los Angeles Charges, but fans stomped off somewhere else leaving FirstEnergy Stadium with lots of empty seats according to witnesses:

Owner is too busy trying to save the Crew on his own RT @Drivin_Cs: @[me] with 14:16 left in Cleveland #fireHue @Browns #browns pic.twitter.com/kU8ze5lGvt

Indians spring training in 4+ months RT @Sykotyk: @[me] 2:09 left in this one. pic.twitter.com/LMZzGItfiJ