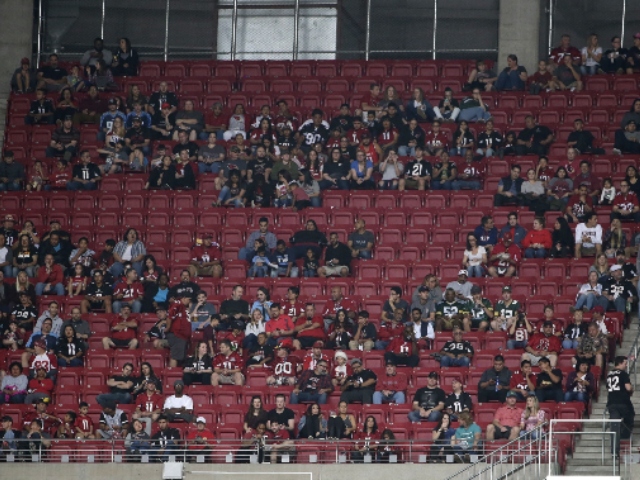 With the NFL’s Week Four kicking off after three weeks of suffering TV ratings, it appears that the disinterest in the game continues to be seen in the stands as tens of thousands of seats remain empty for a 13-game, Week Four schedule.

With TV ratings still dwindling year over year, the teams seem to be finding nearly as little enthusiasm in the stands.

For instance, one Twitter fan joked that there must be an awful lot to do inside the Falcons’ Mercedes-Benz Stadium instead of sitting in the stands to watch the game.

ThErE’s So MuCh To Do InSiDe ThE StAdIum ThAtS wHy YoU SeE eMpTy SeAtS pic.twitter.com/NR3YynSh1b

There are an awful lot of empty red-backed seats there, for sure, as the home team lost in a squeaker to the Bengals, 37-36.

Another Falcons fan chipped in saying, “All those empty seats you see on TV for the Falcons, you think ALL those people watching the game somewhere else in that stadium? Okay..”

All those empty seats you see on TV for the Falcons, you think ALL those people watching the game somewhere else in that stadium? Okay.

The Indianapolis Colts also seemed to lack more than a few fans at Lucas Oil Stadium as they lost 37-34 to the Houston Texans. As one Twitter user noted:

This is midway thru the 3rd quarter. As much frustration as this young team brings, it’s sad to see this many empty seats. I’m pretty ashamed of #ColtNation today. Yea horrible game, but these guys still need our support. #Colts pic.twitter.com/56nELMBfj3

More #batin material for some of my newest followers #HOUvsIND RT @Rick_Olie_Quote: @[me] colts fans FED UP #ricolie #ricoliequotes #starwars we didn’t hit it’! pic.twitter.com/hfGqluxq9c

JMV. How many more empty seats before this organization realizes this city doesn’t buy the crap the Colts are selling?

At press time the San Francisco 49ers were struggling to top the Los Angeles Chargers at StubHub Center, but it also looked like the fans struggled to get out to see the game.

Decidedly pro-49ers crowd here at StubHub Center, with chants of DE-FENSE! Not much blue in the stadium today. pic.twitter.com/04E1GLHivX

By some accounts, it looked like the Dallas Cowboys could use a few more fans as they welcomed and beat the Detroit Lions in another close game, 26-24.