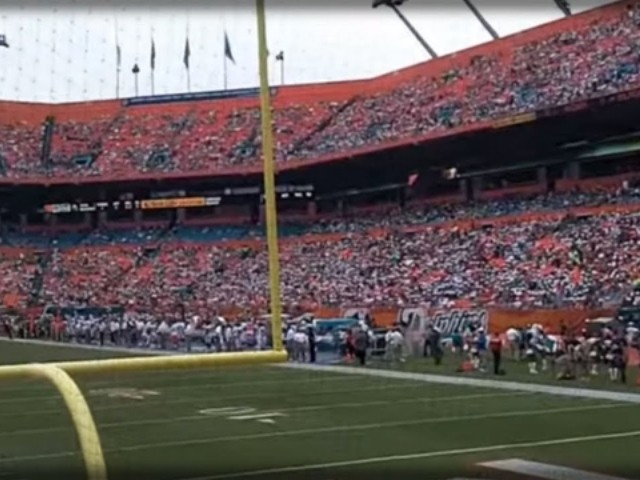 The Buffalo Bills said they had 59,119 spectators at New Era Field on Sunday (capacity 71,870 seat maximum) when the New York Jets came to town. Some thought that estimate seemed high when looking at the empty seats.

The Cleveland Browns also announced their crowd size — 59,392 at FirstEnergy Stadium (capacity 67,895) — as the Browns bested the Carolina Panthers in a 26-20 final. But some photos seemed to show a lot of empty seats:

Watching the Panthers at Browns. There’s at least 20,000 empty seats there. Is the NFL going under??

The Cincinnati Bengals winged their way out west to visit the Los Angeles Chargers at Stub Hub Center, but some fans decried the empty seats:

@LanceMcAlister With all these empty seats this should feel like a home game for Cincinnati.

Lots of empty seats at the pitch today!! pic.twitter.com/58ci2Bysy3

The Washington Redskins hosted the New York Giants at FedEx Field, only to get creamed 40-16. But, if it’s any consolation, basically no one saw it:

In my years of following the Redskins I’ve never seen this many empty seats in the stadium…maybe the fans are sending a message to the owner! https://t.co/72wlkOAW2t

Fans have also questioned the empty seats at the Houston Texans’ NRG Stadium when the Indianapolis Colts came to town:

All these empty seats when your team has a 9 game winning streak. But Houston is a good sports town pic.twitter.com/V9mp0dtm83

As to the fans at Raymond James Stadium, many were left wondering where the fans were:

Finally, the Kansas City Chiefs just pushed by the Baltimore Ravens at Arrowhead Stadium with a 27-24 final, but some said there were a lot of empty seats:

@codybtapp Why so many empty seats at Arrowhead? A 10-2 team? Patrick Mahomes as QB and we still can’t fill up the stadium, I don’t understand it.