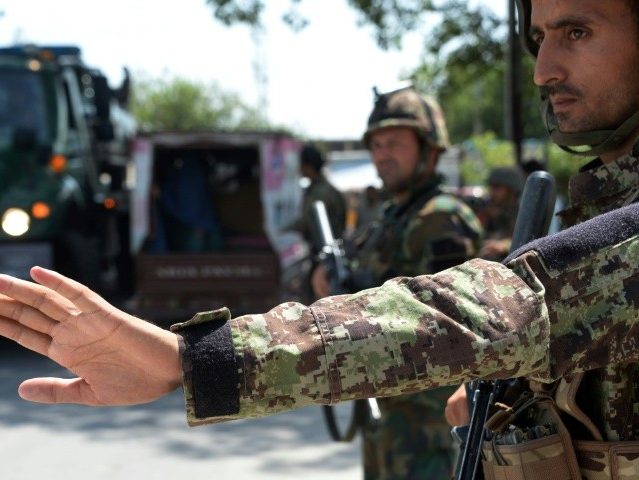 The number of Afghan districts under the control or influence of Kabul “reached the lowest level” since the American government began keeping records in November 2015, the U.S. Special Inspector General for Afghanistan Reconstruction (SIGAR), a watchdog agency appointed by Congress, reported on Thursday.

Afghan National Defense and Security Forces (ANDSF), which include police and army units, have sustained an unprecedented number of casualties as they struggle in their fight against the Taliban despite the more than $80 billion (out of a total of an estimated $132 billion in reconstruction funding) devoted the development of the troops since the war started in October 2001.

SIGAR noted an increase in the number of districts deemed “contested” is driving the decrease in Kabul-held territory.

Both Kabul and terrorist groups lost territory to the “contested” category in the quarter (July 1 to September 30) covered by its latest report to Congress, SIGAR explained, citing the U.S.-NATO mission in Afghanistan — Resolute Support (RS).

SIGAR uses the number of districts under the control of the U.S.-backed Afghan National Defense and Security Forces (ANDSF) or terrorist groups, mainly the Taliban, as a metric of stability in Afghanistan.

“Since SIGAR began receiving district-control data in November 2015, Afghan government control and influence over its districts has declined by about 16 percentage points; contested districts have increased by about 11 points; and insurgent control or influence has risen by 5.5 points,” the watchdog reiterated.

SIGAR explained that of Afghanistan’s 407 districts, Kabul controlled (75) or influenced (151) a total of 226 as of the end of July, marking a nearly 1 percent decrease from the same period last year.

“The number of contested districts—controlled or influenced by neither the Afghan government nor the insurgency—increased by 10 since last quarter to 132 districts, meaning that 32.4% of Afghanistan’s districts are now contested,” SIGAR added.

That means the Taliban controls/influences or contests about 45 percent of Afghanistan.

The Taliban continued to carry out attacks amid increased efforts by the United States to convince the terrorist group to engage in reconciliation talks with the Afghan government.

“Unclassified data show the ANDSF made minimal or no progress in pressuring the Taliban over the quarter. RS-provided data showed that the ANDSF failed to gain greater control or influence over districts, population, and territory this quarter,” SIGAR revealed.

At the request of Kabul, the U.S. military has classified ANDSF casualty figures.

“From the period of May 1 to the most current data as of October 1, 2018, the average number of casualties the ANDSF suffered is the greatest it has ever been during like periods. May was the most active month, accounting for 26% of all casualties during this five-month period,” the U.S.-NATO mission told the watchdog.

Civilians have suffered a record number of casualties at the hands of the Taliban as well, the United Nations recently reported, noting that the figure has reached “extreme levels.”

Afghanistan is home to the world’s “highest regional concentration of terrorist groups,” including the Islamic State (ISIS), the U.S. military asserts.

On October 26, Gen. Joseph Dunford, the chairman of the Joint Chiefs of Staff, insisted that Trump’s strategy to end the 17-year-old Afghan war is “showing results,” Task & Purpose reported.

Under Trump, the U.S. government has made “reconciliation” between Kabul and the Taliban the main pillar of its South Asia strategy, which is mainly focused on Afghanistan.

The U.S. has stepped up its efforts to bring the Taliban to the negotiation table, SIGAR acknowledged.

Nevertheless, the Taliban remains opposed to peace and continues to wreak havoc.

In recent months, U.S. Defense Secretary Jim Mattis described the security situation in Afghanistan as a “tough fight,” as the ANDSF struggled to combat the Taliban along multiple fronts.