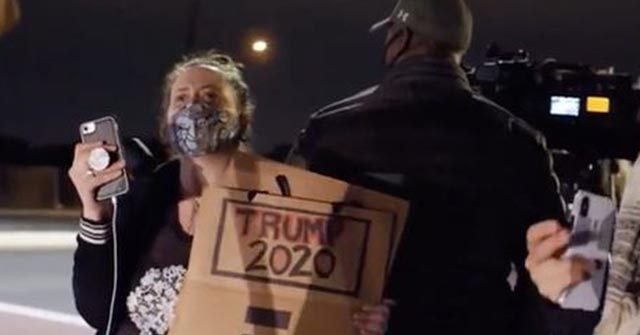 Leftists gathered outside of Walter Reed hospital over the weekend, one of whom chanted “Nazi” and “leader’s going to die” while indicating that she was happy President Trump contracted the Chinese coronavirus. She also affirmed that she was celebrating the president’s death despite the fact that he is recovering from the virus.

Progressives gathered outside of Walter Reed hospital over the weekend to counter the wave of Trump supporters who rallied outside of the facility to show their support and love for the president. Video captured by Breitbart News shows a woman accusing a Trump supporter of assaulting her and her brother while holding a sign reading, “Ra-Rona sure is a bitch huh Trump.”

She called the man a Nazi repeatedly.

“She has a swastika up in her hand, and she’s calling me the Nazi,” a Trump supporter remarked, as others reminded the leftists of Joe Biden’s (D) past working with segregationists and spouting off a few of the former vice president’s infamous quotes — from “poor kids are just as bright and just as talented as white kids” to “you ain’t black.”

The woman continued to shout “Nazi” as a Trump supporter told her “Trump’s gonna be your president for the next four years.”

At that point, the woman began to shout “Wah wah, your leader’s going to die,” over and over as Trump supporters remarked on how “hateful” the woman continued to act.

When asked if she was “celebrating” the president’s death, she said “yeah” despite the fact that the president is, in fact, recovering. She also affirmed that she was happy Trump contracted the Wuhan virus.

Her admission follows a Morning Consult/Politico survey released less than 24 hours after Trump revealed his diagnosis, which showed that 40 percent of Democrats were “happy” that the president contracted the virus.