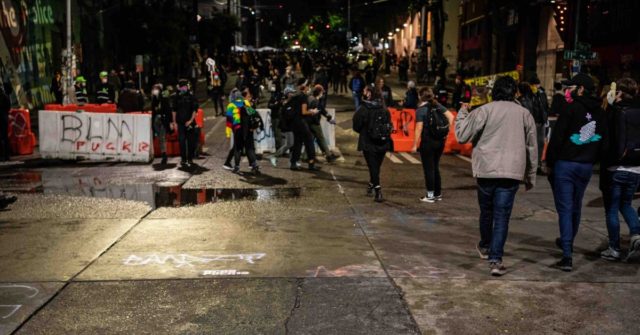 Washington Gov. Jay Inslee was stumped Wednesday afternoon when a reporter asked him at an online press conference about the takeover of part of downtown Seattle by radical leftists: “That’s news to me,” he said, laughing.

As Breitbart News and several other sources reported Tuesday, radicals associated with the Antifa organization took over several city blocks and began erecting barricades. Police had abandoned the area, and reporters were chased away.

The radicals are protesting in solidarity with the Black Lives Matter movement, but took their demands even further, and are attempting to establish an anarchist region within the city, claiming to have “liberated” Capitol Hill.

A reporter asked about it during Inslee’s press conference:

Q: Governor, I’d like to ask you about what’s going on in Seattle. There’s this thing called the Capitol Hill Autonomous Zone. What’s your thought on that — the fact that the protesters have taken that over, and not allowing people to come and go freely? …

A: Well, that’s news to me. So I’ll have to reserve any comment about it. I have not heard anything about that from any credible source. [Laughs] Not that you’re not credible, it’s just that I — before I espouse an opinion, I should know of which I speak. [Laughs]

There were reports that a man named Raz Simone had taken effective control of the occupied area, with an armed gang:

1. Antifa take over an area of Seattle.
2. No police presence.
3. Within 24 hours, a man called Raz Simone declares himself “The Police”.
4. Raz is now armed, with a gang and goes about beating up Antifa and BLM.
5. Antifa don’t know what to do.

Radical Left Governor @JayInslee and the Mayor of Seattle are being taunted and played at a level that our great Country has never seen before. Take back your city NOW. If you don’t do it, I will. This is not a game. These ugly Anarchists must be stooped IMMEDIATELY. MOVE FAST!

The occupiers are demanding the abolition of police, free health care, and amnesty for illegal aliens, among other priorities.