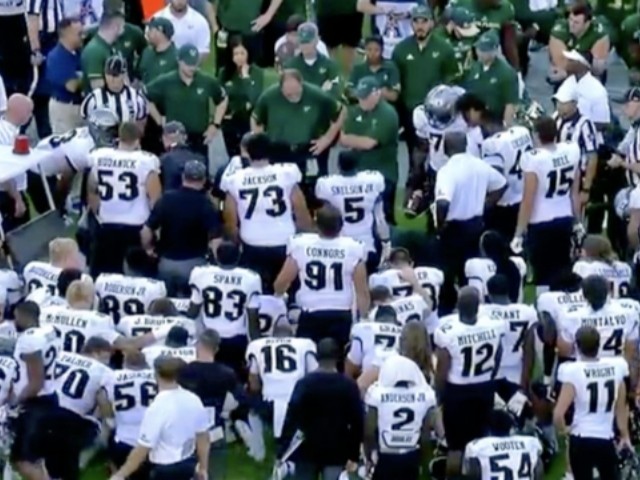 UCF’s dream season took a nightmarish turn on Friday, when star quarterback McKenzie Milton was carted off the field after suffering a gruesome leg injury.

The Knights were playing their arch rival South Florida on Friday afternoon, when, while running to pick up first down yardage late in the second quarter, quarterback McKenzie Milton took a huge shot to the legs:

Players from both schools gathered around Milton and knelt, as the severity of his injury became clear:

After McKenzie Milton went down with a gruesome leg injury in Tampa, players on both teams were on a knee as he was casted up and carted off the field 🙏 pic.twitter.com/w32GAsoxqK

It may be rivalry week but UCF and USF are coming together to rally around Central Florida QB McKenzie Milton after he suffered a gruesome knee injury in the second quarter. https://t.co/d8QJqEwNvm
(📸: @UCF_Football ) pic.twitter.com/oB39TRgldn

While no official word about Milton’s injury has been released, it’s clear that Milton is highly unlikely to play in the team’s bowl game this year.