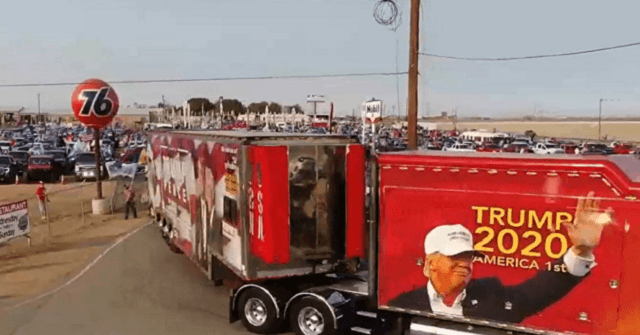 For the second time in three weeks, thousands of people took to the streets of Lubbock, Texas, to show their support for the re-election of President Donald Trump. An estimated 5,000 motorcycles, cars, pickup trucks, and tractor-trailers occupied the fast lane of Lubbock’s Loop 289 freeway.

Trump supporters gathered a Lubbock’s historic Cook’s Garage on Sunday to participate in a rally that would eventually stretch nearly the entire length of the freeway that encircles the city.

Leading the parade around the loop was a giant tractor-trailer rig bearing a mural of President Trump and Vice President Mike Pence.

@realDonaldTrump there was a huge “Trump Train” event today in Lubbock, Tx. Thought you should see. pic.twitter.com/6OB3OtSoYb

“West Texans love their President,” an attendee told the Daily Caller’s Kaylee Greenlee. “There’s a silent majority out there that have been intimidated … I think when they speak I’ll be pleased with the outcome of the election.”

“West Texans love their President,” an attendee told me. “There’s a silent majority out there that have been intimidated … I think when they speak I’ll be pleased with the outcome of the election.” pic.twitter.com/ry4qU7Kiko

Local elected officials and candidates took advantage of the opportunity to address the large crowd of potential voters prior to the rally hitting the streets.

With the festivities concluded, the thousands of Trump supporters hit the road again to show the Lone Star State’s enthusiasm for re-electing President Trump.

Hundreds of cars lined up at Cook’s Garage in Lubbock for the 2nd Trump Train this election season – cars set to take off at 5, several speakers including @RepArrington to start speaking at 3:30. Full coverage on @KAMCNews tonight pic.twitter.com/ucRLTzbUet

Sunday’s event doubled down on the previous Trump Train held in Lubbock on September 27, as reported by Breitbart Texas. During that parade, an estimated 5,000 vehicles and thousands of people participated.