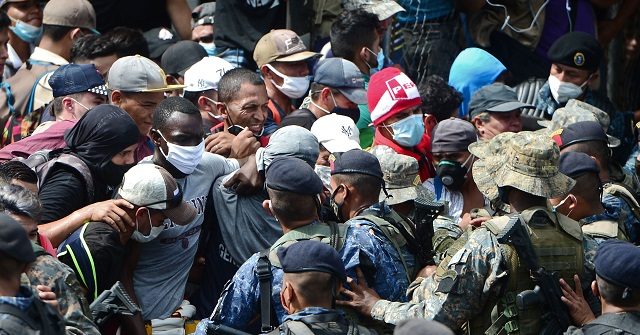 Reports from the Honduras-Guatemala border shows large groups of migrants illegally pushing past security personnel. Despite the threat of COVID-19, the migrants forced their way across the border.

A large caravan of Central American migrants fleeing pandemic-induced poverty has pushed into Guatemala en route to Mexico and the U.S. This video recorded by @MigracionGuate officials at Corinto. pic.twitter.com/q6fPc6GuRi

McDonald reported that Guatemalan border officials expect an additional 3,000 to attempt to enter from Honduras on Friday, raising the total two-day crossing to an estimated 6,000 migrants.

The Guardian also reports thousands of Honduran migrants “hoping to reach the United States” are illegally crossing the border into Guatemala. The report estimates more than 3,000 had crossed the border by mid-day on Thursday.

The article states the odds of the caravan reaching the U.S. border is small due to increased immigration enforcement in Guatemala and Mexico following negotiations with the Trump administration earlier this year. As part of that negotiation, Mexico created a National Guard for the specific purpose of enforcing its southern border with Guatemala.

“The migrants who arrived at the Guatemala border on Thursday had set out walking the previous night from San Pedro Sula, and many wore masks,” The Guardian article reports. “They appeared to be mostly young men, though there were the occasional small children being pushed in strollers.”