A security camera purportedly captures a violent attack where a very large man beats a small woman over a parking spot in San Antonio, Texas.

The camera shows the women pulling into a spot while an SUV appears to be waiting for the same space. The video shows a very large, tattooed man get out of his SUV and confronts the woman who briefly talks to him and walks away. He then appears to kick the passenger door of the Lexus in an apparent act of retaliation.

The female driver’s daughter witnesses the alleged attack on the car, confronts the man and quickly throws a punch, the video shows. The man slams her against another vehicle and lands about six successive punches — driving the woman to the ground. As he retreats, the video shows the driver of the Lexus confronting the man again and he shoves her to the ground.

Bystanders appear to try and calm the situation and take cell phone pictures of the man and his vehicle ,News4 San Antonio, reported. They turned the pictures over to police who say they have identified a suspect and are proceeding with an investigation.

“I just blew him off I’m parked I’m going in,” Norma Lozano (the Lexus driver) told the reporter about how the incident began more than a week ago.

“I’m parked, go find another parking,” she said she told the man. “There’s other parking slots in the parking lot.”

The beaten daughter, Anjelica Lozano, said, “I just remember my hair being pulled getting hit to my face he threw me down to the ground he was punching me.” 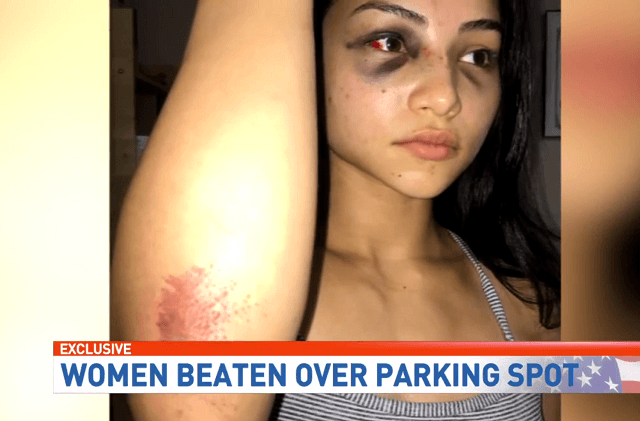 The mother said her daughter’s face appeared swollen and bruised after the fight.

As of publication time, no arrest has been made in connection to this incident.