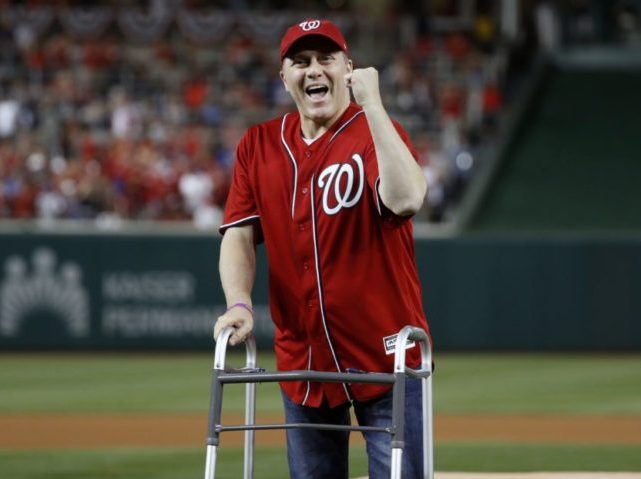 House Majority Whip Steve Scalise (R-LA) told Breitbart News Sunday he began to pray after a left-wing Bernie Sanders supporter shot him on June 14, 2017, attempting a mass murder of Republican politicians, staffers, and volunteers at a congressional baseball game practice in Alexandria, Virginia. Scalise also discussed his new book, Back in the Game: One Gunman, Countless Heroes, and the Fight for My Life, in his interview on SiriusXM Patriot with Breitbart News Deputy Political Editor Amanda House.

Scalise said of his recovery after being shot, “I’m feeling really good, now. I’ve come a long way in that year and five months, but I went through nine different surgeries, and finally got through all the surgeries that have been planned to put me back together.”

“It started off pretty dicey,” he continued. “I was a mess when I showed up at the hospital. … I’m still doing about two days a week of physical therapy to finally be able to walk without crutches. I started with a scooter when I came out of the hospital, and then I was able to get down to two crutches, and then advance to where I’m now walking with one crutch, and hopefully soon no crutches.”

“You want to learn about heroes and what real heroes are like, go read the book and look at the section about what Dave and Crystal both experienced,” said Scalise. “Both were shot during the shootout and kept going at it.”

“Ultimately, Arlington Police came in, as well, and they took the shooter down, [but] it probably would have been one of the worst political assassinations in our country’s history — over a dozen members of Congress were there, plus staff and volunteers that all would have been taken out, and that was his intention.”

Throughout the book, Scalise and his co-author Jeffrey E. Stern detail the “little miracles” that added up to save Scalise’s life.

“My trauma surgeon told me I showed up in the emergency room with a zero blood pressure, which usually means you don’t make it. So another miracle in a lot of miracles,” Scalise told House.

“I’m a man of faith. I don’t talk about my faith a lot. Surely not before this, but I started to pray,” Scalise said about when he could no longer crawl away from the shooter. “It was almost immediate, as soon as I started praying to God, I felt this amazing calm, and I put it in God’s hands.”

“The first thing that came to mind is, I’ve got a daughter. At the time, she’s ten years old. She’s daddy’s little girl, and I said, ‘God, please don’t let Madison have to walk up the aisle alone,’ and that’s just what I thought in my head. And then I just prayed to be able to see my family again. … I prayed that David and Crystal would be successful in carrying out their mission. Thank God they were.”

Scalise credited Rep. Brad Wenstrup (R-OH) with saving his life after being shot, “When we started piecing all this together, Jennifer [my wife] and I came up with the term, we called it ‘little miracles.’ Whether you believe in God or not — I believe in God — I’ve never directly seen miracles before but I saw them that day, and there were a number of them. … I think it’s important to highlight, it’s not just something you can think about, you can point to Brad Wenstrup, a colleague of mine from Ohio. He’s a medical doctor, but he was a trauma combat surgeon in Iraq and he saw a similar incident [with] a person who had an entry wound but no exit wound, and he knew what kind of damage happened to that soldier and he knew the same thing had happened to me. So he immediately put a tourniquet on, and that tourniquet — if it wasn’t applied properly, my trauma surgeon said — I would’ve even have made it to the hospital because at least it held together what little blood I had left inside of me.”

Scalise continued, “Brad normally leaves earlier than the time that he stayed that day. He had an eight o’clock meeting at his office that was canceled at the last minute, and so he just decided to go to the batting cage and get a little extra practice instead of leaving, which would’ve been around seven o’clock before the shooting started which is when he normally leaves. … I wouldn’t have made it if Brad Wenstrup wasn’t there.”