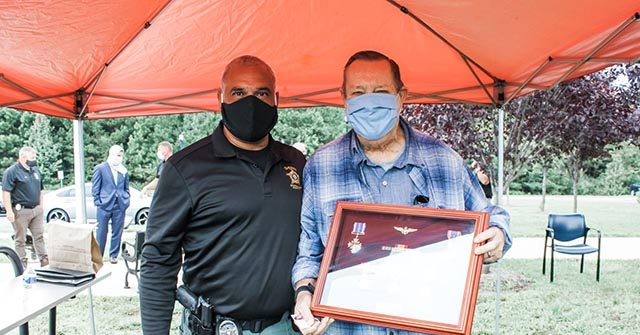 A U.S. Marine Corps veteran in Spotsylvania, Virginia, received a special gift recently after medals he earned in the military were stolen from him.

When Thomas Faleskie’s home was broken into in January 2019, the thieves took his medals, ribbons, and pilot’s wings, according to WKYC.

“The detective assigned to his case, F. Corona, is also a retired sergeant major with the Marine Corps. He was quickly able to identify and charge three thieves, all of whom pled guilty. But, without recovering the medals, Corona didn’t feel justice was served,” the report said.

To remedy the situation, Corona and First Sergeant G. Hamilton, a former Marine Corps captain, eventually got in touch with the Medals of America, who replaced Faleskie’s awards and displayed them in a shadowbox.

During a ceremony at the Spotsylvania Sheriff’s Office on Friday, the officers presented the Vietnam veteran with the medals:

“It amazes me. In no way did I ever expect anything like this,” Faleskie told reporters, adding, “Usually that’s what you expect from a fellow Marine is total support and a bond of friendship.”

“I’m still in a state of shock because I never expected this and I still can’t believe it happened but I’m very happy,” he noted.

In a Facebook post on Tuesday, Medals of America said it was “an honor to work with Detective Corona on replacing Mr. Faleskie’s awards and display case. Semper Fi.”

At the ceremony last week, Corona called Faleskie a “great American” and thanked him for his many years of service to the nation.

In addition, Facebook users praised the officers for going beyond the call of duty to make the veteran feel loved and appreciated.

“This was awesome to see. The Spotsylvania sherrifs [sic] office went all out to find the medals for our vet. Thank you for your service sir,” one person commented.

“Fantastic gesture for a great man,” another wrote.