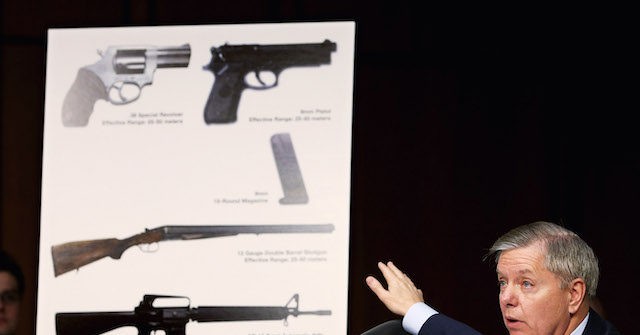 WYFF quoted Graham saying, “There is legislation being pushed by President Biden to ban ‘assault weapons.’ We’ve been down that road before. In 1994 there was an ‘assault weapon’ ban, the evidence indicates that there was really no change at all in crime, because the crooks are going to get a gun.”

He then leaned over and picked up an AR-15 and pointed out that “there are 20 million semiautomatic, assault-type weapons, owned by Americans today.” He noted that Biden is after the 20 million firearms.

On Sunday, Graham told Fox News’ Chris Wallace that his home was safe because he owns an AR-15.

The Hill reported Graham saying, “I own an AR-15. If there’s a natural disaster in South Carolina where the cops can’t protect my neighborhood, my house will be the last one that the gang will come to because I can defend myself.”

Graham also talked to Wallace about Sen. Dianne Feinstein’s (D-CA) “assault weapons” ban, saying, “I would challenge Sen. Schumer to bring the assault weapons ban to the floor of the United States Senate. It won’t get 50 votes, much less 60.”