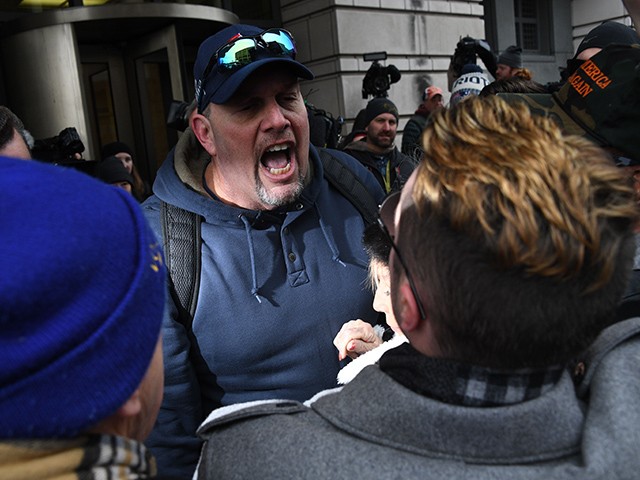 In a chaotic scene ahead of longtime political operative Roger Stone’s scheduled appearance at a federal courthouse in Washington, D.C, Tuesday morning, video purportedly shows supporters of the Trump ally being threatened by an angry protester.

The 41-second clip shared to social media shows the protester, sporting a blue hoodie and a New England Patriots baseball cap, verbally accosting Stone associate Jacob Engels, calling him a Nazi and a traitor. Engels, who is Jewish, is seen holding a sign which reads “Roger Stone Did Nothing Wrong!”

“How am I a Nazi?” Engles pressed the protester to no avail.

Seconds later, the protester orders another man not to “fucking touch me” when asked to calm down.

“Don’t fucking touch me, asshole,” the protester said a second time while pointing in the man’s face.

Engles then calls the protester a fucking asshole. I’m an asshole? he asked. “You’re a fucking nazi.”

“Anti-semite!” the Stone associate then yells repeatedly at the protester.

When the second man attempts to calm down the protester a second time, he is told not to get in his “fucking space.”

“Go ahead,” he continued. “Do something! You want to fucking do something?”

The protester then grabbed a pro-Stone sign from a supporter’s hand and walked away from the crowd.

Stone pleaded not guilty to charges in the Russia investigation after a publicity-filled few days spent torching the probe as politically motivated. He faces charges that he lied to lawmakers, engaged in witness tampering and obstructed a congressional investigation into possible coordination between Russia and Trump’s 2016 presidential campaign.

Stone made no public statements as he arrived for the hearing in a black SUV. He waved to a small crowd of supporters chanting that he did nothing wrong and holding up glowing photos of him. And he largely ignored a group of protesters yelling “Lock him up” and carrying signs reading “dirty traitor.”

Stone was arrested early Friday at his south Florida home. He appeared in federal court in Washington amid new signals about special counsel Robert Mueller probe’s endgame. Acting Attorney General Matthew Whitaker said Monday that the investigation is “close to being completed,” although an exact timetable is unclear.