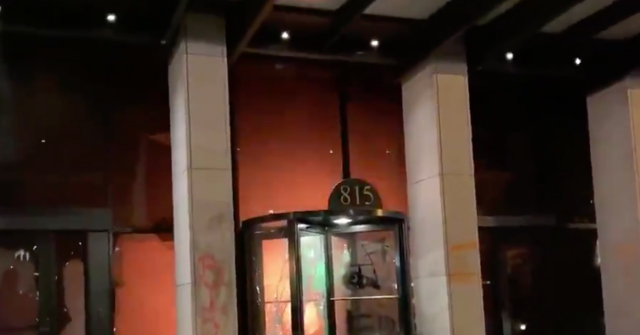 Rioters on Sunday evening set fire to the offices of the American Federation of Labor and Congress of Industrial Organizations (AFL-CIO) union.

Rioters set ablaze the AFL-CIO union offices during the fourth night of protests over the death of George Floyd in Minneapolis, Minnesota.

Breaking: The AFL-CIO building in Washington, D.C., has been set on fire by rioters. The AFL-CIO is the largest federation of unions in the United States. pic.twitter.com/Al1Qr0ACj9

The AFL-CIO headquarters a block north of the White House has been ransacked. There’s a fire in the lobby, all the windows are smashed and I can hear sprinklers going off. DC Fire haven’t been able to come anywhere near this area. pic.twitter.com/kpw1Jqgfgt

Handful of people breaking glass at the AFL-CIO, some have run inside to continue beeaking things, as others in the crowd react:

Damage was just done to the AFL-CIO in DC pic.twitter.com/XEUnHgNa5V

Breitbart News is live-blogging the riots across American cities this weekend here.