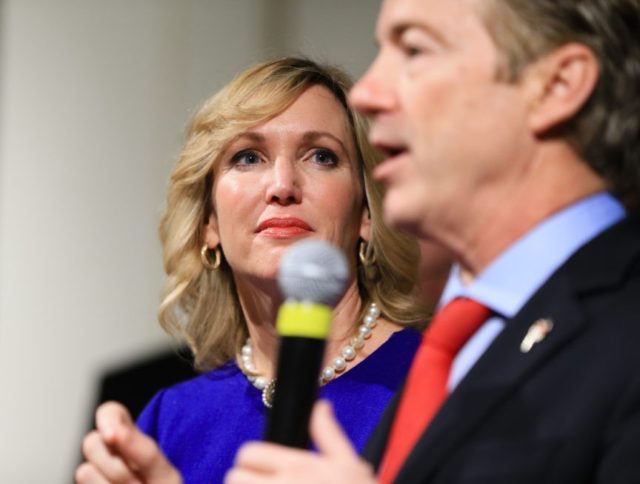 Kelley Paul, the wife of Sen. Rand Paul (R-KY), described her increasing concerns for the safety of herself and her family amidst increasing calls from Democrats and the broader left to amplify politically motivated hostility towards Republicans. She offered her remarks in a Friday interview with Breitbart News Deputy Political Director Amanda House.

“We’ve updated all of our security systems at home. I sleep with a loaded gun by my bed. I’m home alone a lot, obviously when Rand is [in Washington, DC], and so I’ve got deadbolts all around my house so that if someone’s in my house when I go to bed I’m deadbolted in three different levels,” Paul told House.

“It’s bizarre. I’ve never been like this in my whole life. … We used to never even lock our doors, and now that has all changed. Even going out to dinner in D.C., last night, you worry. You hope that people aren’t going to come up and just start screaming at you.”

Paul recalled a neighbor assaulting her husband outside their home in Bowling Green, KY, describing what she said is an increasingly politically polarized America. Her husband suffered broken ribs as a result of the attack, and the attacker was sentenced to 30 days of incarceration.

“Words do matter, and there are so many, quite frankly, unhinged [and] unstable people out there, and when they hear someone on their side telling them, ‘Get up in their face,’ they take that literally, and they think that gives them a license to be very aggressive, be harassing, throw people out of restaurants, and I don’t think anybody wants to live in a country like that,” Paul continued.

Paul composed an op-ed published by CNN entitled, “My husband, Rand Paul, and our family have suffered intimidation and threats,” in which she expressed anguish over harm done to her husband and threats directed against her family.

Paul’s op-ed was prefaced with the clause describing it as an “open letter” to Sen. Cory Booker (D-NJ), who she said had encouraged his political supporters to threaten and intimidate Republican politicians.

In June, Booker urged his supporters to “get up in the face of congresspeople.” Booker’s communications director later described his boss’s statement as “an appeal for political activism that seeks common ground” illustrative of an “enduring commitment to decency.”

In 2017, a left-wing supporter of Sen. Bernie Sanders (I-VT) attempted a mass murder of Republican politicians, opening fire at a baseball practice in Alexandria, VA. Rand Paul, who was present at the event, later said “nobody would have survived … it would have been a massacre [if not for the Capitol Police].”

Mrs. Paul expressed fear of a future violent attack being inspired by Democrats’ calls for hostility towards Republicans.

“It is very threatening, and it’s very frightening, frankly, to feel like you are under assault, and that your own home address is being released for the purposes of intimidating [or] threatening you in some way,” Paul said.

“Because of the violence that Rand has experienced in the last year, it does scare me that there is going to be somebody that is really unstable that takes that message a step further and that something terrible happens to someone in this toxic and highly polarized environment.”

House asked Paul if her family considered withdrawal from politics in light of left-wing threats directed against them.

Paul replied that her husband is committed to serving his Kentuckian constituents, “even though this last year has been frightening and hard.”