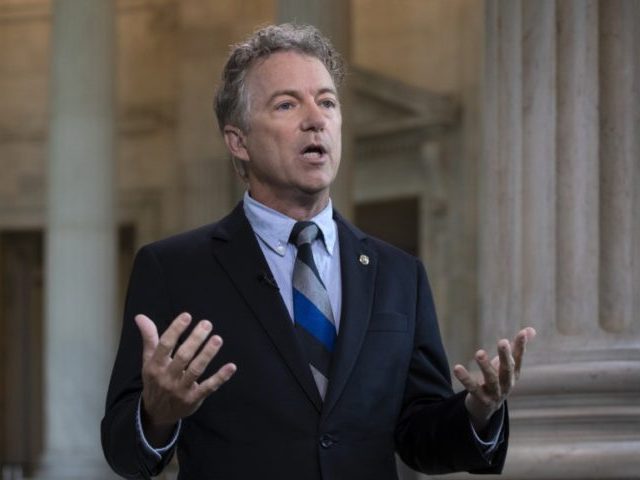 House asked, “I want to start off with a question that I think is going on in the heads of many conservatives. We don’t have a wall, yet. We haven’t seen real infrastructure reform. We have people still dying in Afghanistan, yet it looks like we’re about to get criminal justice reform with Van Jones. So to those conservatives out there thinking, where is our immigration and health care reform, what do you say to them?”

Paul replied, “You are, I guess, looking at the world with the glass half-empty. I’m looking at the world with the glass half-full. In fact, I think it’s mostly filled. I think the glass is overflowing to the brim with things we’ve done, so far; regulatory reform, enormous tax cuts, the biggest tax cut since Reagan, two conservative Supreme Court justices. And then we go from there. Those are some big issues.”

Paul added, “With regard to criminal justice reform, I think it brings both left and right together. Ninety-five percent of people who are in prison, right now, are getting out. They’re going to live in your neighborhood. They’re going to live in your town. Wouldn’t we prefer that they actually learn some skills in prison and learn about work versus going back and being a criminal, again? I think there are a lot of things that right and left came come together on in criminal justice reform. The fact that there are people on the left that I don’t like their ideas on most other things doesn’t mean I can’t like some of their ideas.”

House then asked, “Some conservatives like Sheriff David Clarke, David Lopez, Daniel Horowitz say that this legislation is a jailbreak of sort. Why is it not a jailbreak?”

Paul responded, “I think that, one, we ought to think about whether or not we have any kinds of compassion for people who are in jail. So, for example, if a woman is pregnant and giving birth, should she be shackled? I think it’s a bit obscene that we would actually shackle people while giving birth. So I think there are a lot of things.”

Paul continued, “For many years, there was disparity between crack cocaine and powder cocaine. It turned out that most people who used crack cocaine were in the African-American community. Most people using powder cocaine were in the white community, and yet we were putting people in jail two and three times longer. Most of these people were African-American. That just wasn’t fair. It’s still not fair. So one of the things that we’ve got is making it retroactive. There are still people in prison for 20 and 30 years for crack cocaine, whereas their counterparts — who are better off economically and typically white [and] had better attorneys — got six months probation for the same amount of cocaine some people got a decade or more. I think those things ought to be fixed.”

House inquired, “You have the president’s support behind this FIRST Step Act, now. You look like you might have enough votes. Are you confident that this bipartisan legislation will go through?”

“I think it’ll get 65 or 70 votes,” speculated Paul. “The key is actually getting to a vote. As you know, the Senate or in the House, unless leadership allows a vote to happen, they control the strings. But there are 65 to 70 votes for this. This really does some modest changes. I don’t think there’s anything so dramatic in this.”

Paul stated, “We have to think as a country, Do we really want to incarcerate people — sometimes for life — for a non-violent drug crime, or do we want to say, ‘People make mistakes, and maybe somebody who used drugs in their youth may grow out of that, and I think there’s a very good chance they will.’?”

Paul concluded, “I want to lock up violent people, and I want to make sure that we have room for them. So many prisons have been overcrowded that we’ve released violent criminals early because we’ve got too many people smoking pot that we’re putting in prison. I think we’re wasting a lot of prison space on non-violent drug offenders that would be better used housing violent criminals.”