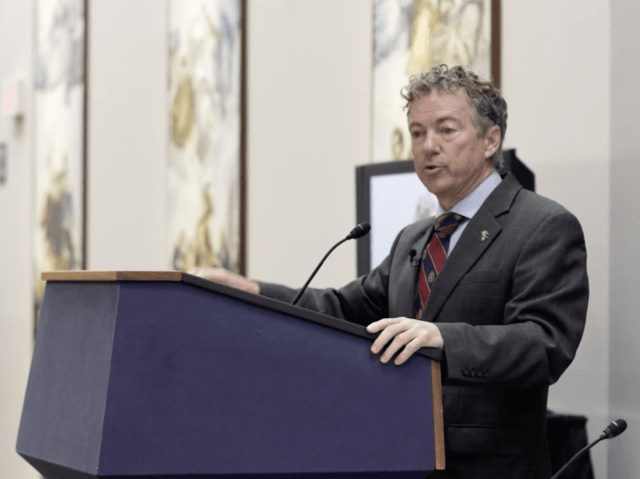 Sen. Rand Paul (R-KY) said at a conference in Washington, DC, last week that he is beginning to see a “right-left” coalition movement growing, attracting those who want to restrain or end wars the U.S. is waging without congressional authorization.

“There is a right-left movement out there talking about a more realistic foreign policy,” he said. “There are some people who are coming together who are saying, ‘we’ve had too much war for too long.’”

“There’s not enough discussion about this,” he said.

Paul was the keynote speaker at a day-long conference hosted on Thursday by The American Conservative that explored the need for a more restrained American foreign policy and how to achieve that. The conference featured lawmakers and foreign policy experts from the right and the left.

Paul argued that the U.S. would have a more modest and restrained foreign policy simply by following the Constitution, which he said gave the responsibility of waging war to Congress versus the Executive Branch.

He cited founding father James Madison’s words to fellow founding father Thomas Jefferson: “Executive is the branch of power most interested in war, and most prone to it. It has accordingly with studied care vested the question of war in the Legislature.”

“A lot of it comes back to, how should we be doing it?” Paul asked. “Is this a unilateral decision we leave to the president? Or is this something our founding fathers and the Constitution intended we would discuss?”

Paul argued that Congress has in recent years abdicated the responsibility of waging war to the Executive Branch.

Congress authorized military intervention in 2001 in Afghanistan and 2002 in Iraq. However, both the Obama administration and the Trump administrations have used those authorizations for use of military force (AUMFs) to authorize war today in Iraq, Afghanistan, Syria, and Yemen under vastly different circumstances.

Paul spoke at length about his opposition to U.S. involvement in the war in Yemen. In 2015, after Iran-backed Houthi rebels in Yemen overran the capital of Sana’a, the Obama administration began supporting a Saudi-led military coalition fighting the Houthis.

The U.S. provided refueling, intelligence, and logistical support to the coalition. That support continued under the Trump administration, which has come under increasing pressure to end the policy in the face of Yemeni civilian deaths.

“There is this old-fashioned notion that we actually vote before we go to war,” Paul said.

But, he added, “My main objection in this whole thing is the war in Yemen is a tragedy like most wars, but it’s a particular tragedy because they’re one of the poorest countries on the planet … I think it is something we should not be participating in.”

Paul said he and Sen. Chris Murphy (D-CT) have tried to stop U.S. arms sales to Saudi Arabia and noted that he has gained support from colleagues over the last two years.

“I think opinion is changing over whether or not we should be arming Saudi Arabia,” he said. He noted public backlash against the regime for its alleged murder of dissident and Washington Post columnist Jamal Khashoggi.

“It didn’t help that they chopped up a dissident,” he said, referencing unconfirmed reports in Turkish media that Saudi officials dismembered Khashoggi. Other reports suggested the Saudis dissolved Khashoggi in acid. As the Saudis have not produced a body, no confirmation exists regarding the fate of Khashoggi’s remains.

He said some Republican colleagues argued that supporting Saudi Arabia was important to check Iran, its regional rival. But Paul said, “Frankly, I’m not sure who is more evil, Iran or Saudi Arabia.”

Paul also slammed the 17-year-old War in Afghanistan, which is costing about $45 billion per year. There are currently about 14,000 U.S. troops in Afghanistan training and advising Afghan forces to fight the Taliban.

He said the U.S. spent $90 million for a luxury hotel in Kabul seven years ago (reports suggest $85 million) that was never finished and is “half-empty” today. The hotel is now a danger since the Taliban could use it as a position for their snipers, he said. Now, the Afghan government wants $200,000 to $300,000 to tear it down, he claimed.

“Is that not an insult?” he asked.

In addition, Paul said the U.S. spent $5 million on a natural gas station in Afghanistan that is too dangerous to visit. “You cannot travel in Kabul by car more than a street or two. You go by gunship. If you wanted to visit the natural gas station, it was supposed to cost about a half a million, it cost $45 million,” he said. “You had to go with 300 Marines and they didn’t think it was a wise use of their Marine’s lives to go visit this gas station, and I don’t think it’s a wise use of your money to spend it on a gas station if we can’t even visit it.”

He said the $45 billion spent in Afghanistan each year could be better spent on U.S. infrastructure. “When the president said he wanted a parade, I thought it was a dumb idea, but I said, ‘You know what, I’m for it if you bring everyone home from Afghanistan, I’ll show up for the parade.’”

He also said the media was also at fault since it favors “action” versus “restraint,” and are too busy focusing on the littlest thing Trump says or does, versus focusing on issues like the War in Yemen.

“Why don’t you step up to the plate, blank network, and talk about real issues?” he asked.

He slammed both the Republicans and Democrats for their hostility to Russia, which he said prevented necessary work to negotiate weapons treaties. He said Democrats are normally in favor of arms negotiations with Russia, but they think they need to hate Russia because they think President Trump is too friendly with Russia.

“There truly is a Trump derangement syndrome and they’re caught up in it,” he said.

“I’m convinced that there is a majority of American people who believe as I do and as many of you do that we’ve been at war too long, and in too many places. I think there is a possibility for changing things, and I will continue to agitate for that.”