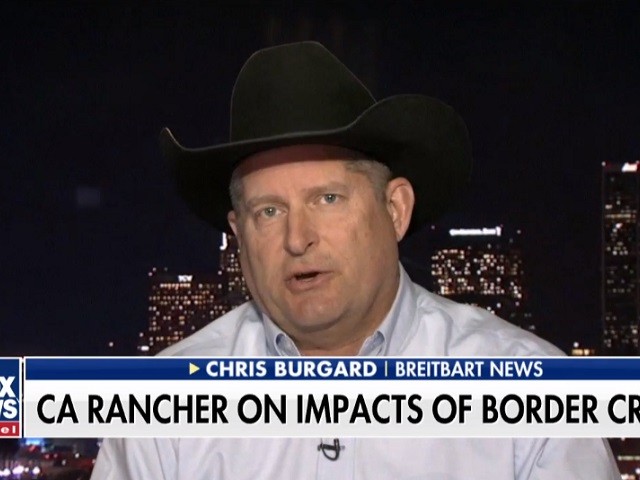 Tuesday on Fox News Channel’s “Fox & Friends First,” rancher and Breitbart contributor Chris Burgard took his plea for House Speaker Nancy Pelosi to visit his and others ranches on the U.S.-Mexico in Arizona to get a firsthand account of the threats coming from the south and the effectiveness of a wall versus a fence.

“Four-and-a-half years ago, she did not take us up on our invitation, and if she would she would have seen how bad things are,” Burgard said. “My buddy John, conservatively at the time, had 2 million illegal aliens come through his ranch. In two years, 53 truckloads of dope making it through there.”

Burgard credited improvements to the fence on his ranch and coordination with local sheriff’s departments for the decrease in drug trafficking and Pelosi would see the results.

“What these ranchers live with every day is beyond comprehension of most humans,” he said. “I mean, can you imagine 2 million strangers coming across your ranch? Try running a ranch operation when the trucks carrying the dope are breaking fences. Your cows are getting out, how do you run a breeding program when you can’t keep your bulls and heifers separated? And everything that hits him then goes on to the cities.”

The Arizona rancher criticized Pelosi for not taking Department of Homeland Security Kirstjen Nielsen’s information more seriously because if she had, it could make a difference.

“You know, it is so disheartening when the Speaker of the House doesn’t believe DHS Secretary Kirstjen Nielsen,” Burgard said. “She doesn’t believe her DHS facts. Well, right now it is a fact more people are dying in the United States from heroin and opioid overdoses than car accidents. Well, this is where it is coming from. If you stop it at the border, you will save lives in the rest of America, and it is just something that needs to be acknowledged, and you need to do something.”

Burgard insisted the initial offer made to Pelosi is still on the table.

“The offer still stands — and John says he will even feed her, but she has to eat meat because beef is what is for dinner,” he added.