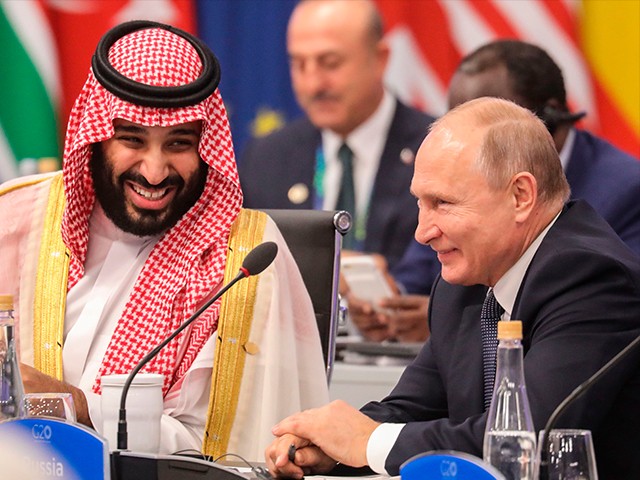 Russian President Vladimir Putin and Saudi Arabia Crown Prince Mohammed Bin Salman on Friday warmly embraced one another at the start of the G-20 Summit in Buenos Aires, Argentina.

Putin and Bin Salman high-fived and shared a laugh as the Russian president took his seat at the annual gather of world leaders.

WATCH: President Putin and Mohammed Bin Salman shake hands and laugh before sitting next to each other at the G-20 summit https://t.co/ARRKebhfR5 pic.twitter.com/UnwufgeGGX

The two leaders are scheduled to meet during the summit to discuss the killing of Washington Post contributor Jamal Khashoggi, according to the Russian government. Kremlin official Yuri Ushakov said Putin and the Crown Prince will also talk about the ongoing war in Syria and oil production.

“The political dialogue [between Russia and Saudi Arabia] is regular and substantive. On October 5, 2017, Saudi King Salman bin Abdulaziz Al Saud for the first time made a visit to Russia. Vladimir Putin’s possible return visit to Saudi Arabia is on the agenda,” Ushakov said in a statement to TASS.

Asked if Khashoggi will come up in the pair’s meeting, Ushakov replied: “They will certainly discuss the issue.”

The White House said this week that President Trump will not meet with the Saudi Crown over the weekend, but has not “ruled out any interaction.”

“I know the president’s schedule is pretty packed and has a number of sessions that he will be involved in with the G20,” said White House press secretary Sarah Sanders. “I don’t think there’s any time for us to add anything additional. Whether or not there’s interaction, I’m not gonna rule that out.”

Earlier Friday, President Trump canceled a planned meeting with Putin set for Saturday after telling reporters he would “probably” meet with the Russian president, citing the recent skirmish in the Sea of Azov between Russia and Ukraine.