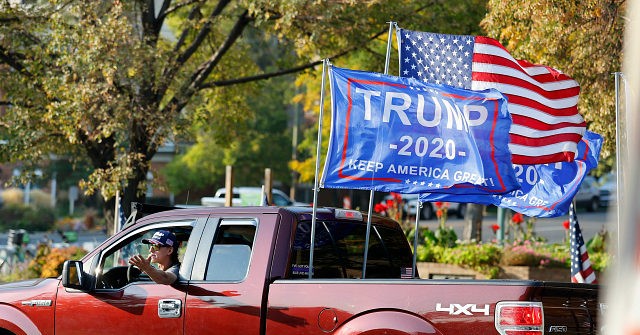 Americans gathered for a parade along Interstate 17 in Arizona on Saturday to show support for President Donald Trump.

“Some attendees told FOX 10 the caravan stretched for more than 30 miles near Peoria with thousands of cars bearing Make America Great Again flags and Trump signs,” the outlet said.

The event was also dubbed a Back the Blue rally to show support for police officers.

Today, I was driving on I-17 in Phoenix and I came across an AWESOME caravan parade for President @realdonaldtrump! Arizona loves Trump and we’re ready to reelect him in November! #FOURMOREYEARS pic.twitter.com/XM3KMEJlyT

“It’s overwhelming and profound to see the support and the compassion and love for this president,” organizer Theresa Montoya told azfamily.com.

Montoya said supporters came from all over the Valley to participate and everyone ended the parade at a barbecue restaurant in Wittmann.

“This has taken a life of its own. We have a common goal and that’s to get the president elected for four more years,” she continued.

Thousands more welcomed President Trump to Newport Beach, California, on Sunday when he arrived for a fundraiser, Breitbart News reported.

“The American people love President Trump,” an attendee told reporters. “And when you look down the street, you can see it. We love our president.”

Thousands upon thousands lined for miles along our motorcade route in CALIFORNIA to cheer on President @realDonaldTrump!!!!! pic.twitter.com/tp0oGQ34MH

Also on Sunday, hundreds joined a pro-Trump parade in Erie County, Pennsylvania, according to Breitbart News.

“We want to make sure everybody knows in this town that the silent majority is not silent anymore. We’re here to make noise. It’s a big election. In my lifetime, this is the biggest one I can remember. So, we’re all excited and ready to go vote,” said organizer Brian Shank.