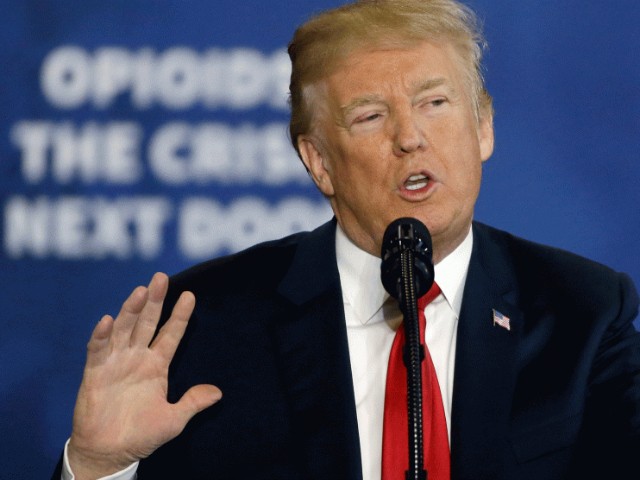 President Donald Trump is moving forward with a plan to end birthright citizenship via executive action, he said in an interview with Axios released on Tuesday.

“On immigration, some legal scholars believe you can get rid of birthright citizenship without changing the Constitution,” Axios’ Jonathan Swan asked President Trump in the video interview.

“With an executive order,” Trump replied.

“Exactly,” Swan followed up. “Have you thought about that?”

“It was always told to me that you needed a Constitutional amendment–guess what? You don’t,” Trump said. “Number one, you don’t need that. Number two, you can definitely do it with an act of Congress. But now they’re saying I can do it with just an executive order. Now, how ridiculous–we are the only country in the world where a person comes in, has a baby, and the baby is essentially a citizen of the United States for 85 years with all of those benefits? It’s ridiculous. It’s ridiculous–and it has to end.”

Swan asked if Trump has discussed this matter with legal counsel for the White House and he confirmed he has, and that this is “in the process.”

“It will happen–with an executive order, that’s what you’re talking about right?” Trump said. “I didn’t think anybody knew that but me, I thought I was the only one.”

Revoking birthright citizenship would have immediate and far-reaching consequences. It would mean the children of illegal aliens, even if born in the United States, would not be bestowed U.S. citizenship upon birth. It would also likely deter the practice of foreigners having “anchor babies,” where they aim to give birth to children on U.S. soil so as to obtain U.S. citizenship for their children at birth.

Trump moving forward on such plans would likely set off a legal and political battle of epic proportions, as lawsuits would come in challenging the order’s legality and the president’s authority to act via executive action on this front. But there also remains a possibility, if Republicans hold the House in next week’s midterm elections and add seats in the Senate, that a more permanent legislative fix not dependent on who is in the White House could come for dealing with ending birthright citizenship.